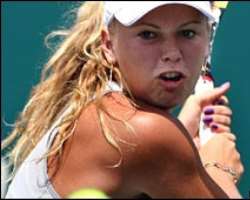 The Dane was forced out with injury after the first set of her Warsaw Open quarter-final against Jie Zheng.

The 19-year-old retired from the Family Circle Cup semi-finals in the US with an ankle injury in April, having rolled her ankle trying to reach the net.

Wozniacki said at the time she expected to be fit for the French Open, which begins at Roland Garros on Sunday.

Having called for medical treatment during the first set in Warsaw, she bowed out after losing the set 6-3, just as it began to rain. 606: DEBATE

She should have stopped earlier. If she's got any sense she should skip RG and only play Wimby if fully fit

erictheblueuk
British number one Elena Baltacha is also battling to be fit for Roland Garros, having retired from the Strasbourg International with injury on Wednesday.

And Belgium's former world number one Kim Clijsters is out of the tournament, with the 26-year-old US Open champion still suffering with a foot injury.