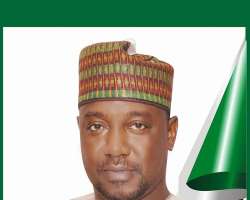 Mansur Abbas Waziri alias Wazirin-Gobe, the young entreprenuer and fast rising political heavyweight amidst the political circle of Kontagora Emirate has congratulated Alhaji (Dr.) Abubakar Sani Bello over his legal victory of the Supreme Court upholding his candidacy as the All Progressives Congress (APC) standard flag bearer at the 2015 governorship election in Niger State.

Wazirin-Gobe stated that, the victory of Mr. Governor is a clear sign that, Alhaji Abubakar Sani Bello has always believed in due process, justice and fairness adding that "i am proud of my Governor, and anybody that knows him very well, will testify to the fact that, he doesn't get distracted when focused in achieving his goals".

He added that, Governor Sani Bello is on a mission to reposition Niger State and In Shaa Allah, he will, adding that, no matter how hard anti-progressive people try to distract him, by the Grace of God, they will fail.

In the same vein, Waziri also used the opportunity to congratulate Mr. Governor who was conferred with the traditional title of SADUAKI KONTAGORA by his Royal Highness, the Sarkin Sudan of Kontagora and Vice Chairman, Niger State Council of Traditional Rulers, Alhaji Sa'idu Namaska CON. He described the traditional development, timely and worthy on the right person at the right time.