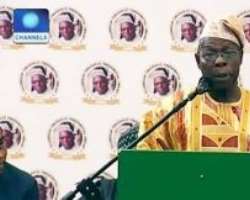 The Olusegun Obasanjo Presidential Library has been officially opened on Saturday, in Abeokuta, the Ogun state capital.

About 45 serving and ex- presidents across the globe were present to witness the grand opening of the complex which is the first of its kind in Africa.

The Obasanjo Library was launched in 2005 and its commissioning on Saturday, is part of the programs to celebrate the 80th birthday of the two-time democratically elected President of Nigeria.

According to the former Nigerian leader in his address of welcome, 'the library is a culmination of fulfilment of dreams and visions which began in 1988 when I came to realise how much vital material that should have been preserved from the civil war and from our period of military government, were allowed to waste carelessly.

'Then I tried to see what could be salvaged, recovered and preserved but not much except some materials on the civil war from both sides of the divide which I was able to microfilm.

'Materials were lost but lessons were learnt,' he said.

The Acting President of Nigeria, Professor Yemi Osinbajo and the President of Liberia, Mrs Ellen Johnson-Sirleaf, among others who also spoke, extolled the virtues of the former president and underlined the advantages of preserving history and capturing the present.

The occasion was indeed a roll call of world and African leaders, royal fathers and members of the business community.