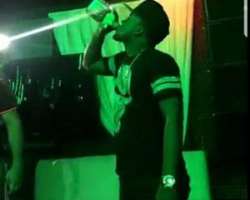 A 23-year-old Dominican man has died of alcohol poisoning after reportedly downing a whole bottle of tequila in one go for a £520 bet.

Kelvin Rafael Mejía approached a group at a nightclub in the Dominican Republic and bet that he could down a whole bottle of the Mexican alcohol, according to local media reports.

But minutes later he became unable to stand and the young man collapsed in the club's toilets and later died in hospital. The medical examiner confirmed that Mr Mejía had died of alcohol intoxication.

A video of the 23-year-old's challenge has been shared extensively on social media.

The clip shows other nightclubbers at Vacca Lounge cheering Mr Mejía on as he drinks, while others film him.

Elis Gómez, the owner of the nightclub in the city of La Romana has distanced himself from the event.

The nightclub owner told news agency EFE that Mr Mejía, a regular at the club, took it upon himself to bet a group he could complete the challenge.

Local police have closed Vacca Lounge temporarily so that an investigation can be carried out into Mr Mejía's death.

However no arrests have been made.
The aunt of Mr Mejía, Sandra Perozo, said that his death should serve as an example to young people that “not everyone who says they are a friend is really your friend.”