IPOB is not unlawful group: Court 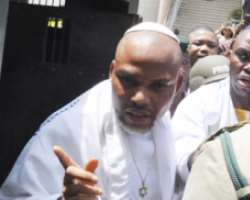 THE Abuja Division of the Federal High Court, yesterday, struck-out six of the 11-count criminal charge the Federal Government preferred against the detained leader of the Indigenous People of Biafra, IPOB, Mr. Nnamdi Kanu and three other pro-Biafra agitators.

Justice Nyako held that the Federal Government failed to prove that IPOB, allegedly managed by Kanu and his co-defendants — Chidiebere Onwudiwe, Benjamin Madubugwu and David Nwawuisi, is an unlawful society. Justice Nyako said the six charges she struck out were not supported by the proof of evidence the prosecution adduced against the defendants, adding that none of the six charges established a prima-facie criminal case against the defendants.

Whereas the court branded some of the terminated charges as “hollow” and “scanty”, it however sustained five other charges against the defendants. For instance, the court noted that the Federal Government failed to produce any evidence to support allegation in count nine of the charge that the 2nd defendant, Onwudiwe, as National Coordinator of IPOB and the 4th defendant, Nwawuisi, who was serving as MTN Field Maintenance Engineer in Enugu State, conspired to install Radio Biafra transmitters on MTN masts sited at Ogui Road near St. Michael Church, Enugu, having agreed for the payment and receipt of N150, 000.

So also was the allegation that Onwudiwe committed an act preparatory to an act of terrorism by carrying out research for the purpose of identifying and gathering improvised explosive devices, IEDs, making materials to be used against the Nigerian security operatives carrying out their lawful duties.

According to Justice Nyako, the Federal Government ought to have charged Onwudiwe before a Magistrate Court over his alleged intention to commit an act of terrorism. She said the government did not establish any ingredient of crime in its allegation that Kanu had between March and April 2015, imported into Nigeria, a radio transmitter known as TRAM 50L and kept it in a container that was left in custody of the 3rd defendant, Madubugwu, at Ubuluisiuzor in Ihiala LGA of Anambra State.

Kanu still has cases to answer The court, however, held that Kanu has a case to answer pertaining to allegation in count-four that he declared the radio transmitter which was concealed in a container as unused household items. Whereas the court struck out counts 3, 6, 7, 9, 10 and 11 of the charge, it however, sustained counts 1, 2, 4, 5 and 8. The sustained charges, to which all the defendants entered a fresh plea of not guilty, yesterday, involved conspiracy, treasonable felony, publication of defamatory matter and Kanu's alleged importation of goods contrary and punishable under Section 47(2) (a) of the Customs and Excise Management Act, Cap C45, Laws of the Federation of Nigeria, 2004.

In count three of the pending charges, the Federal Government alleged that Kanu had in a broadcast in London on April 28, 2015, through Radio Biafra, referred to President Muhammadu Buhari as “a paedophile, a terrorist, an idiot and an embodiment of evil.” Kanu, who was hitherto the Director of Radio Biafra and Television, is facing four out of the five remaining charges.

The Federal Government alleged that Kanu, being the leader of IPOB, conspired with his co-defendants and others now at large, on diverse dates in 2014 and 2015, in Nigeria and London, to broadcast on Radio Biafra, monitored in Enugu and other areas, preparations for states in the South-East and South-South zones and other communities in Kogi and Benue states, to secede from the Federal Republic of Nigeria, with a view to constituting same into a Republic of Biafra.

Drama as Kanu explodes from the dock Meanwhile, before Justice Nyako fixed March 20 and 21 to commence full-blown trial of the defendants, Kanu, made frantic effort to address the court from the dock, but was denied the opportunity. Realising that his request was turned down, Kanu, who dressed like a Jewish rabbi, with a veil wrapped round his shoulder and a shawl on his head, bellowed: “I will not allow any secret trial! No witness protection either, none! Why am I not allowed to speak? Am I not the one standing trial?”, he asked the Judge.

Displeased with the way the IPOB leader spoke to her, Justice Nyako threatened to declare him “a nuisance.” “If you make further noise in this court, I will declare you a nuisance and conduct this trial in your absence. Counsel, advise your clients to keep quiet immediately or I will declare them nuisance in this trial”, the Judge fumed. The court equally declined to entertain oral applications for the defendants to be released on bail pending the determination of the case against them.

“As at now, I don't have any pending bail application. When you file, I will know how to attend to them”, Justice Nyako added. Meantime, counsel to the 3rd defendant, Mr. P. I. Esere, has filed an application seeking to disqualify the prosecutor, Mr. Shuaibu Labaran, from further handling of the case. IPOB members at Federal High Court Abuja. Photo by Gbemiga Olamikan Esere is contending that Labaran lacks the right to prosecute the case, considering that he was among operatives that interrogated some of the defendants. While Justice Nyako okayed the application for hearing on the next adjourned date, she also agreed to look into alleged over-zealousness by DSS officials, who were said to have arrested some people that went to visit Kanu at Kuje Prison.

It will be recalled that all the defendants had through their respective lawyers, challenged the competence of the suit. Kanu's lawyer, Mr. Ifeanyi Ejiofor, told the court that Radio Biafra was duly registered in the United Kingdom, adding that IPOB was also registered in over 30 countries in the world.

Ejiofor stated this on a day his client accused President Buhari of committing treasonable felony against Nigeria. He made reference to the December 31,1983 military coup that led to the installation of Buhari as Head of State. The said coup ousted the democratically elected government of President Shehu Shagari. Kanu, who has been in detention since October 14, 2015, after he was arrested upon his arrival in Nigeria from UK, threatened that he would in the course of the trial, expose secrets he said would sink Nigeria.

The defendants equally alleged plots by the Federal Government to import foreigners to testify against them, a claim that was dismissed by the prosecution.

It's God's handiwork – IPOB Reacting to the ruling, yesterday, IPOB, in a statement in Awka, by its Media and Publicity Secretary, Comrade Emma Powerful, described the outcome as the handiwork of God and urged members of the group to remain resolute in the quest for the restoration of the Republic of Biafra.

The statement read: “We the Indigenous People of Biafra, IPOB, and its leadership worldwide, thank God Almighty and eminent Biafrans, who made it possible for the case in the Abuja court to be successful. We thank all IPOB members and Biafrans who made it to the Abuja High Court in solidarity for the Biafra cause and our leader, Mazi Nnamdi Kanu. May God Almighty bless them all.

“We advise every IPOB member and Biafrans worldwide to remain resolute in the pursuit of the restoration of the nation of Biafra because it is ordained by Almighty God and no man born of a woman can stop it, unless God says so. This is the time for the restoration of the prophesied nation in West Africa.” MASSOB hails charges withdrawal but…. Also, The Movement for Actualization of Sovereign State of Biafra, MASSOB, welcomed the development but warned that the decision should not be a pacification for any interest group.

MASSOB leader, Uchenna Madu, in a statement, said: “MASSOB welcomes the striking out of the six charges but insists that all the remaining count charges must be withdrawn because Nnamdi Kanu and others did not commit any offence against Nigeria. MASSOB will continue to press for the release of Nnamdi Kanu and others.”

“MASSOB warns that the court should not pacify the DSS and Hausa/Fulani interest but discharge and acquit all pro-Biafra detainees. We also salute the representatives of Nzuko Umunna that visited our brother, Nnamdi Kanu recently at kuje prison.” The group congratulated the Chukwuma Soludo-led Igbo group that recently made case for Kalu's release and also visited him in Kuje Prison.