Toyota to begin assembling cars in Nigeria this year 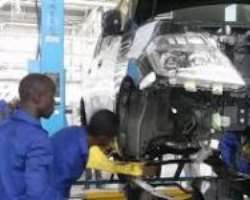 The first set of Nigeria-assembled Toyota cars will be rolled out in a couple of months, The Punch reports.

According to the chairman, Toyota Nigeria Limited, Chief Michael Ade-Ojo, “The semi-knocked down parts have yet to come; but in a few months' time, they'll arrive here in Lagos and we'll invite guests to come and be part of history, to witness the unveiling of locally-assembled Toyota cars.

Ade-Ojo, who spoke in Lagos  at the unveiling of an automobile assembling plant  in Lagos recently, said that the new plant would be dedicated to the production of two vehicle brands, Toyota and JAC, with a target of 15,000 vehicles yearly.

Though the section reserved for the production of Toyota cars has yet to commence operation, the JAC division has produced its first set of 10 vehicles.

Elizade Autoland Limited, a subsidiary of Elizade Nigeria Limited, owned by Ade-Ojo, has the franchise for the JAC brand of vehicles.

Ade-Ojo described JAC as a “junior brother of Toyota in Nigeria and it is growing.”

Also speaking, the managing director of Elizade Nigeria, Mr Demola Ade-Ojo said the plan is to produce 20 JAC vehicles every month, adding that it was starting with the SKD stage and hoped to move to the completely-knocked down section when sufficient components could be sourced locally.

The plant, which is currently operating on a single shift, was said to have been certified by the federal government to build different brands of cars.

Toyota Nigeria last year presented its first locally assembled bus, Hiace, to the motoring public as a confirmation that it had joined the league of auto firms that had embraced the federal government's auto policy introduced in 2013 to encourage local production of vehicles.

At least 30 automakers have sought and received the federal government's approval to set up vehicle assembly plants in Nigeria. But some of them that have commenced operations are complaining of low patronage.

The National Automotive Industry Development Plan, according to the government, is to generate employment, boost Gross Domestic Product, and promote the Small Medium and Enterprises in the sector as well as aid skills development and transfer of technology.

Late last year, the federal government keyed into the #BuyNaijaToGrowNaira campaign and bought made in Nigeria vehicles for the Federal Road Safety Corps (FRSC)

The vehicles were bought from Innoson Motors, Nnewi and Peugeot Automobile Nigeria, Kaduna.