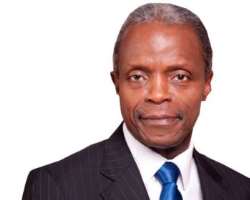 The Presidency, on Tuesday, said there were indications that the economy was on its way out of recession.

A statement issued by the Special Adviser to the President on Economic Matters, Adeyemi Dipeolu, said a review of the recent GDP figures released by the National Bureau of Statistics (NBS), showed a contraction of -1.30 per cent in the fourth quarter of 2016, translating into an estimated economic growth rate of -1.51 per cent for the full year.

He pointed out that the economy actually performed better overall last year as the growth rate was higher with a contraction at -1.5 per cent, than the -1.8 per cent predicted by the International Monetary Fund (IMF). The recession may have buttomed out with the improving trends in several key sectors of the economy, including agriculture and mining, Dipeolu said.

He said with the ongoing engagement of the oil-producing communities of the Niger Delta, the Buhari administration is hopeful that increased oil production output would be sustained.

He said the ongoing implementation of the Social Investment Programmes, and a possible early legislative passage of the 2017 budget, are expected to spur a positive multiplier effect on the Nigerian economy.

The Buhari administration, he said, will not relent in its determined effort and it's comprehensive approach to bring about the full recovery of the Nigerian economy and set it on a solid path of sustainable growth.

He said: 'The recently released data from the National Bureau of Statistics showed that Gross Domestic Product (GDP) contracted by -1.30% in the fourth quarter of 2016. This translated into an estimated growth rate of -1.51% for the full year 2016. These figures reflect the slow-down in the economy for most of 2016 but also show that the recession may have bottomed out because of an improving trend in several key sectors.

'Although the oil sector declined by -12.38% on a year on year basis, this was a relative improvement compared to the third quarter when the decline amounted to -22.01%.  This outcome was due mainly to increases in production such that the quarter on quarter growth for the oil sector between the third and fourth quarters was 8.07%.

'The non-oil sector however declined by 0.33% after showing some resilience in the third quarter when it grew by 0.03% at the height of the recession.

'Agriculture grew at 4.03% in the fourth quarter of 2016 which was a marginal decrease from the 4.54% growth in the third quarter.  This is mainly because agriculture (especially crop production, which accounts for the bulk of agricultural production) is highly seasonal, with growth in the third quarter of the year usually higher than the others.  Nevertheless, the overall outcome for the year was that the agricultural sector grew by 4.11% for the whole of 2016 which was higher than the figure of 3.72% for 2015.' he added. - The Nation.