Why Nigerian elite are corrupt – Osinbajo 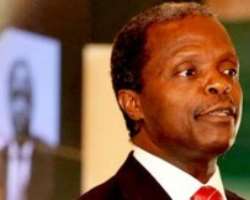 The Acting President, Yemi Osinbajo, on Tuesday said so much corruption was prevalent among the nation's political, religious and private sector elite because of the high premium placed on wealth in the country.

He said the elite had decided to view wealth as a measure of worth, hence the large scale corruption in the system.

ï¿¼Osinbajo said this while inaugurating the Private Sector Advisory Group for the Sustainable Development Goals at the Presidential Villa, Abuja.

He said some nations were doing better than nations who attach importance to wealth because such nations that do better decided that the value of human beings was in their contribution to the society.

Osinbajo said, 'We have decided as an elite in this country that wealth is a measure of worth. It is a decision we made consciously or unconsciously.

'The political elite have decided that wealth is a measure of worth and that is why you find so much corruption among the political elite. Even the religious elite believe that it is a blessing of God.

'There are some societies that have decided that the value of human beings is in their contribution to the society. Those societies, of course, have done better than those who have decided that wealth, no matter how it was obtained, is a measure of worth.

'I think it is important if our elite decide that dealing with poverty is worth the while and that it will measure whether or not we are serious about our society.'

The Acting President said there was enormous responsibility placed upon the elite to do something about the millions of the extremely poor in their midst.

The responsibility, he said, should not be taken lightly since that is how they would be measured at the end of their lives.

'At the end of our lives, the question that will be asked is what is the impact that we made on people's lives. Nobody will be measured by how much money we made or the positions we held.

'A lot of our people in this country hang their hopes on us. They look up to us and believe we can do it and despite all the failures and the false starts, our people especially the poor and the vulnerable still believe that these elite will and can deliver.

'Let us therefore take this as a personal responsibility to our people to do something profound that will make a huge difference in the lives of our people.

'This is why I am so excited about this coming together of the public and private sector to ensure that the Sustainable Development Goals are realised in our time and that nobody is left behind,' the Acting President said.

While describing the event as the beginning of the unique partnership between the public and the private sector, Osinbajo said he had always believed that Nigerian elite, had a responsibility to ensure that they did something for the society which would affect it fundamentally. – Punch.