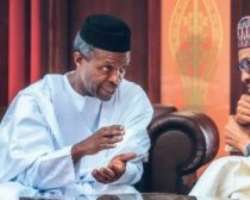 Presidency has condemned the speculation tending to score the performance of the Acting President, Professor Yemi Osinbajo higher than that of President Muhammadu Buhari.

For the people at the seat of power, such comparison was a calculated mischief to cause a division in the current administration.

The presidency said that the government was one and as such, there should be no basis for comparisons whatever between the President and his deputy.

The Political Adviser to the President in the Office of the Vice President, Senator Femi Ojudu,  made the remarks while fielding questions from State House correspondents on the speculations making the rounds, preferring Osinbajo's style of governance to Buhari's on Monday in Abuja.

It will be recalled that Osinbajo has been piloting the affairs of the country since January 19 when President Buhari jetted out to London, United Kingdom on medical vacation.

Since his departure, Osinbajo has apparently taken a couple of initiatives that had elicited hopes that Nigeria may get out of its present state of economic recession sooner than expected. One of those decisions was a directive to the governor of the Central Bank of Nigeria, CBN, Godwin Emefiele to review the country's foreign exchange policy which seems to be producing results at the moment, judging from the Naira value appreciation over the Dollar.

Osinbajo had earlier also forwarded the name of the Acting Chief Justice of Nigeria, Walter Oonneghen to the Senate for confirmation contrary to the Buhari's perceived reluctance since appointing the CJN in acting capacity in November, 2016.

According to  Ojudu,  it is completely unfounded and unwarranted to make such comparisons.

“I think it is thoughtless. I also see it as a ploy by the opposition to cause an unnecessary ‎division. It is a joint ticket. The president and the vice president were elected based on the manifesto of the party and since they were sworn-in, they have been committed to implementing that manifesto. The same people who said we never had economic team, no policy, nothing, are the ones saying this. It is now the policies we are implementing are maturing and they are seeing the result. It is not a question of one person being better than the other person.

“I will give you an example, there is nothing that has been done since the vice president started acting that is not something that started far back in the past. A good example is the Niger Delta initiative. The President called the Vice President and said I am giving you the mandate, go into the Niger Delta, meet with everyone who is a stakeholder, all the communities, talk to the militants and make sure you solve this problem for the benefits of Nigerians.

“We are losing 1.2 million barrels of oil per day. All the gas pipelines powering the turbines are being blown up. And the President has said unless and until we resolve this problem, we will not get out of recession. The VP took up the mandate and went to the Niger Delta. It is the initiative of Mr. President not that of Vice President. “This is mischief makers, those who do not wish this country well, who are always promoting crisis, who will not allow the people to benefit from this democracy are the ones promoting this kind of divisive tendencies.”

He is in charge but like I said earlier on, this is a joint ticket the president of Nigeria remains the president of Nigeria. He is acting because it is one and the same. He is more experienced, he has been in the game longer than the vice president and if there are major issues that he needs to take decision on, he could call on him and say Sir, what do you think about this we are about to take decision on it. Do you have opinion? That does not mean he is not in charge.”

He said, “Again, one other thing you have to see is that if you give someone a responsibility, he must be able to show to Mr. President that despite that he is not being around is not going to create any vacuum. He can then decide not to sleep at all, all through the time the president is a way just to show him that he is capable of ensuring that Nigeria goes on well while he is away.

“And the President could also have given the mandate let nothing go wrong, I believe in you, I appointed you as my Vice President you must make sure that you do this. If you have a boss who gives you an assignment you will want to impress him and Nigerians as well and that for me is what has happened. ‎It is not that one person is better than the other, certainly not.

“I'm telling that I have seen some things sent out intentionally to cause some kind of division within the presidency. Some people who have been condemning everybody in the past, I see them on twitter and on facebook and generally on social media. Some people are trying to promote division and we are not going to allow that. This president and vice president worked together in tandem and I know they both have confidence in this nation”, he said. Also asked to react to the concerns in Katsina State that the president was poisoned, the Political Adviser said it was stupid to believe such stories.

“The way I will react to that is that those of you in the media should be careful what you pick from the social media now. It is becoming a factory for fake news in the Nigeria. A lot of things you see on social media can never be true. I saw that, I read it and I assessed it using the prism of these factors, those indices we use to analysis stories in the media and found out that, that it cannot be true.

“For example they said somebody kept N77 trillion somewhere, imagine that. What is the total value of Nigeria's economy that because of somebody keeping N77 trillion therefore some people want to poison him so that they can inherit the money. I mean we have a president that nobody in this country can question his integrity. As a young officer, a middle officer, a senior officer and as a Head of State till now, nobody has been able to tarnish his image or come up with anything.

“For me, it is not even worth responding to, as soon as I read it, I dismissed it, it is so ridiculous. Again it is the handiwork of our enemies, the problem is fakeness has almost become global and universal, other countries are experiencing it. Those who want to destabilize the country, they come up with all kinds of stupid stories, some kind of unimaginable stories. So we should just discountenance those things.”