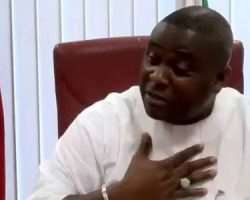 The court, which was presided over by Justice Fatun Riman, on Monday directed to the Independent National Electoral Commission  to withdraw the Certificate of Return it issued to Akpan and awarded N200,000 costs in favour of the plaintiff, Bassey Etim.

The court additionally directed that Akpan refund all salaries and entitlement he collected so far as a senator to the Federal Government.

In his judgment, Riman, said that Akpan was not duly elected in the primary election of the People's Democratic Party on December 7, 2014.

Speaking to newsmen after the judgment, the defence counsel, Offiong Offiong (SAN) said that he would brief his client before arriving at a decision on what action to take.

“I cannot advise my client through the media, I will advise him as a professional certainly on the matter when I meet him.”

The plaintiff lawyer, Taiwo Abe, said that the judgment in favour of his client was a victory for democracy and a dark age for impunity.

He explained that the quality of judgment given by Justice Riman would not be faulted by any court of law as the justice was so thorough in his judgment.

“I am happy with the judgment, it is a victory for democracy, and I can assure you that no court of law will fault this judgment.

“My client has proved his case and I have no doubt even if they appeal or at the Supreme Court my client will still win.”

It was learnt that Etim had approached the court after the 2015 general elections seeking to determine the eligibility of Akpan to continue to occupy the Akwa Ibom North East senatorial seat in the Red chamber.

His argument was that Akpan did not contest the PDP primary election as a senatorial candidate into the Akwa Ibom North East senatorial district.

The court, however, submitted that there was no evidence to show that Akpan was an aspirant for the People's Democratic Party primary for National Assembly as oral evidence from his witnesses were even more contradictory.

It decided that since Etim was the authentic aspirant for the assembly election, he was, therefore, the winner of the election.