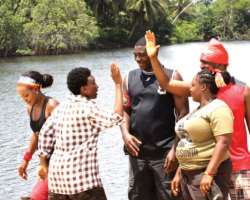 Yes, that's the question many now want answers to, after weeks of watching and enjoying the brilliantly conceptualised and executed debut celebrity series of popular reality show, Gulder Ultimate Search.

With the eventual eviction of Weird MC (who was the last woman standing), the battle is now left for Darey, Daddy Showkey and Emeka Ike. And the fans can't seem to make up their minds on who they'll want to wear the crown and take the prize.

But it's just a week to go: One final week before the producers call it a wrap. Inside sources tell e-Punch the final three contestants are to return to camp next week, for a final recording where the Ultimate Celeb will be selected. The show is expected to end on Saturday May 29.

With interesting tricks and tasks, and a group of contestants not afraid to deliver drama, the GUS Celebrity Showdown has become a favourite with TV audiences, proving again, that Nigerians want well though-out TV entertainment – not just the lazy video rotations producers continue to burden us with.