BABANGIDA: FG TO SET UP COMMITTEE ON OKIGBO REPORT 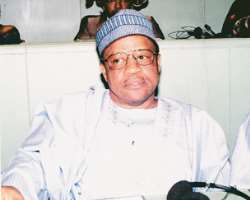 Ibrahim Babangida
A committee is to be set up by the Federal Government to study the report of the Pius Okigbo-led committee on the alleged mismanagement of the $12.4bn Nigeria earned from crude oil sales during the 1991 Gulf War.

The outcome of the study, said the Attorney -General of the Federation and Minister of Justice, Mohammed Adoke, (SAN), would determine whether former military President Ibrahim Babangida would be prosecuted or not.

The minister neither said when the committee would be set up or its membership.

Babangida's military junta set up a Dedicated and Special Accounts through which the whooping sum was allegedly disbursed.

A coalition of civil society groups, the Socio-Economic Rights and Accountability Project, had in a petition demanded the trial of the Niger State-born general for the use of the funds but was advised by Adoke to send a signed true copy of the Okigbo-panel report to his office.

The group complied with the request and was consequently told by the minister through a letter dated May 12, 2010 that an action was being taken on the matter by Justice ministry.

The letter with reference number HAGF/PG/2010/Vol.1 which was personally signed by Adoke reads in part, 'I acknowledge the receipt of your (SERAP) letter dated May 5, 2010. I appreciate your effort in making available a signed copy of the Okigbo panel report.

'As appropriate, I shall set up a committee that will confirm the authenticity of the said report and also review the allegations and recommendations contained therein with a view to ascertaining whether these allegations can sustain a criminal charge. While we shall keep you informed of our efforts in this regard, I would like to thank you for your concerted effort in sustaining the fight against corruption in our society.'

Reacting on Thursday, SERAP said it welcomed the minister's assurance, saying what was required was the will on the part of the President Goodluck Jonathan administration to try Babangida.

A part of the Okigbo panel report reads, 'The Dedication and Special Accounts had become a parallel budget for the Presidency. The decision as to what expenditure items to be taken out of these dedicated accounts was made by the President alone. For example, the accounts had been utilised to defray aim assortment of expenses that could not in any way be described as priority such as: $2.92m to make Documentary Film on Nigeria: $18.30m to purchase TV/Video for the Presidency; $23.98m for Staff Welfare in the Presidency; $.99m for travels of the First Lady abroad; and $59.72m for security.

'The approved budget for the Federation did not reflect the receipts into the Dedication and other Special Accounts; that the balances kept in these accounts were not included in the Federation Account, a practice which violated the fundamental precepts of the federal fiscal relations in Nigeria, and that in a number of cases, there were significant variations between the amounts approved for payment and the actual disbursements made, without any further explanation from the documents supplied.

'The impact on the exchange rate in 10 years under review would have been so significant that the Naira would have been stronger in 1994, in relation to the dollar, than it was in 1985 when it stood at N1 to N1.004.

'It should be evident, therefore, that the burden of external debt to the Paris and London Clubs and the pressure on the exchange rate would have been substantially mitigated if not completely eliminated.

'It is this fact that calls to question the wisdom and prudence not in the creation of these accounts but in its disbursements.'

When contacted on the telephone for confirmation of the minister's May 12 letter to SERAP, the Chief Press Secretary to Adoke, Mr. Ambrose Momoh, said he could not speak because he was attending a meeting.

He promised to call one of our correspondents back but did not do so as at press time.

Mumuni also advised Adoke to involve the civil society and the United Nations in the work of the proposed committee.

He said, 'While we prepare a detailed response to the letter by the minister, we would like to welcome the clear commitment of the administration of President Goodluck Jonathan to prosecute the former military President on the basis of the strong and compelling evidence contained in the Okigbo committee report.

'We note that this commitment has been at the very centre of the new government's platform for the future. We commend the important and encouraging steps already taken by the minister , but strongly urge the government to accelerate action to ensure that the case is diligently and effectively prosecuted.

'Pursuing this case to a logical and successful conclusion will show that our government can do things differently when it comes to the fight against corruption in this country. This would also provide effective remedy for the countless victims of high level official corruption in the country.'

SERAP added that a successful prosecution of the case was 'a key step in improving the overall governance environment in the country.'

It said, 'This administration has an important opportunity to show that its words would be its deeds. We urge the minister to involve the civil society and the UN in the work of the committee so as to ensure that justice is done.

'We stand ready to offer full support and assistance to the authorities in the prosecution of suspected perpetrators of the $12.4bn scam.'