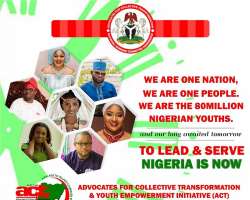 A youth group, Advocates for Collective Transformation and Youth Empowerment Initiative (ACT), has lamented that young Nigerians in South Africa are major victim of renew xenophobia attacks in the country, calling on the Africa Union and United Nations to intervene immediately.

The group in a press statement signed by its National President, Dr. Oluwatayo Fashogbon and National Secreatery Ifetoluwa Ajayi said ‎it will ‎approach the United Nations Security Council to demand that the United Nations immediately takes diplomatic measures and military measures to put an end to the serial xenophobic attacks against Nigerians and other black Africans.

"While we condemn the attack on our people in South Africa, we should not reciprocate with violence but explore all legal and lawful options to get justice for Nigerians in South Africa."

Fashogbon called on the Nigerian government to take extra-diplomatic measures in dealing with the latest deadly assaults.‎

The group urged the Nigerian government to immediately order the closure of the High Commission of the Republic of South Africa in Lagos and Abuja and cut all diplomatic ties with the country until safety for Nigerians residing in the country is guaranteed.‎