Why I attended Akeredolu's inauguration – Fayose 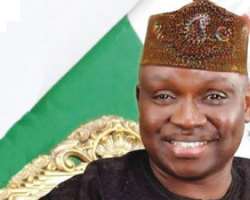 Ekiti State Governor, Ayo Fayose, said on Friday that he attended the inauguration of Governor Rotimi Akeredolu of Ondo for Yoruba unity.

Fayose, a prominent member of the opposition Peoples Democratic Party (PDP), said this in a statement issued by his Chief Press Secretary, Mr Idowu Adelusi, in Ado-Ekiti.

He said that he could not have done otherwise because the unity of Yoruba people was too important for anybody to play politics with.

'I see nothing wrong in attending the inauguration of an APC person in neighbouring Ondo State.

'Being a leader of the Peoples Democratic Party (PDP) should not stop me from attending the inauguration of an All Progressives Congress (APC) governor.'

According to him, such an occasion is a national one that well-meaning people should identify with.

'This is a Nigerian affair; when a governor is sworn in, we have to support him; we are talking of regional integration and unity here; Akeredolu is already one of us by virtue of his new position.

'We have to support him since electioneering has come and gone and a winner has emerged, and we have to work together in the spirit of the people of our region.

'We cannot play politics with the welfare of the people of our region; we have to support Akeredolu to make the difference.

'This is a matter of the Yoruba nation and after Nigeria, Yoruba nation comes firstâ€Ž; we don't need to play politics with the welfare of Yoruba people.'

He advised that his actions in recent times should not be mistaken for an attempt by him to dump his party, the PDP, insisting that nothing of such was in the offing.

'How can I join the APC? As you already know, I am the main issue of the APC.