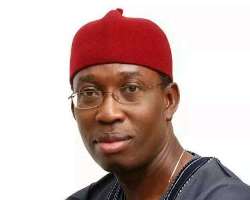 The worst is yet to be heard of the Delta State governor, Senator (Dr) Ifeanyi Arthur Okowa, a knight of Saint Christopher in the Anglican Communion who allegedly got delivery of N8 million from the state treasury while preparing for his senatorial race in 2011.

It was reliably learnt that Okowa who was in dare need of financial assistance at that time purportedly ran to Prince Sam Obi, his kinsman and the then Acting Governor of the state when the court sacked Dr Emmanuel Eweta Uduaghan as governor in 2010.

Investigation revealed that Obi allegedly advised Okowa to raise claims from the various ministries and government offices he has served to enable him pursue his political ambition at the National Assembly (NASS).

Our correspondent gathered that Okowa who served the state as Commissioner for Water Resources, Commissioner for Health, Commissioner for Agriculture and Natural Resources under former governor James Onanefe Ibori and Secretary to the State Government (SSG), under his predecessor, Dr Uduaghan allegedly raised the sum of N8 million from various claims.

Checks revealed that Obi who secured the sum of N20 billion bond which he claimed would be used to pay contractors and for workers’ salaries also allegedly assisted Okowa from the N20 billion bond.

Meanwhile, after his emergence as governor of the state, Okowa then appointed Obi as his Senior Special Assistant (SSA) on Special Duties and Inter-Governmental Affairs as compensation for the assistance Obi allegedly rendered him way back in 2010.

When The Nigerian Voice contacted the Chief Press Secretary (CPS) to the governor, Mr Charles Ehiedu Aniagwu, on phone, he said he would not respond to cheap blackmails.

His words: “look my brother, I will not answer your question, I don’t respond to cheap blackmails”, he retorted.

Efforts to get the side of Obi proved abortive at press time.