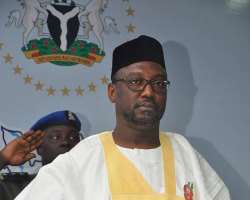 Niger State House of Assembly has passed a vote of confidence on the Governor of the State Alh. Abubakar Sani Bello, at the commencement of the debate on the State Government 2017 Budget Proposal, at the deliberations on the Governor’s speech on the Budget.

In his remark, the Speaker of the House disclosed that based on the positive performances of the State Governor since assumption into office, especially the successes recorded for the 2016 Budget in the State, as enumerated by the mover of the motion despite glaring economic challenges with the ongoing recession in the Country, the State Governor deserve commendation for his Prudency, Accountability, and General Good Government in the State, in the provision of basic Socio-economic Infrastructures to the people of the State and the restructuring of the Agencies for improved internally generated Revenue that has positive impact to the well being of the Citizens, made the House to pass the verdict, to serve as impetus for the Executive arm in the State.

The Speaker, Rt. Hon. Marafa Ahmed Guni, after due consultations with his colleagues unanimously adopted the motion to pass the vote of confidence on the Governor Alh. Abubakar Sani Bello and later directed the Clerk of the House, Alh. Abdullahi Mohammed Kagara, to transmit the resolution of the House to the Executive.

Meanwhile, speaking earlier on the Governor’s speech, Hon. Abdullahi Adamu Mammagi, member representing Gbako Constituency, also commended the Executive arm of the State Government for ensuring even distribution of basic Socio-economic amenities to all parts of the State, which includes, rural infrastructures, Health, Education, Agriculture, and the repositioning of the State Agencies charged with generating Revenue especially the State Board of Internal Revenue Service, which resulted in the removal of its Chairman to pave way for the desired restructuring of the Agency and appointment of the State Commissioner of Finance as the new acting Chairman, with other 16 members of a committee to fashion out a new road map to achieve the desired objectives to enhancing the revenue base of the State.

In his contribution, the Deputy Speaker, Hon. Hussaini Ibrahim, commended the Administration’s effort in transforming the State Education Sector, with the introduction of Teachers Training Colleges in the 3 Senatorial zones of the State.

He also advised the various House Committees to partner with the Executive to ensure the exercise of its oversight functions, to monitor the implementation of the budgetary provisions when eventually pass into law and assented by the Executive.

In his remark, the Speaker of the House, Rt. Hon Marafa Ahmed Guni, commended the legislators for their positive contributions and after due consultations with the House, the house commenced the second reading of the Appropriation Bill as recommended and eventually adopted by the House, the speaker announced.

Most of the members who contributed on the Governor’s speech deliberations at the plenary shared the same opinion with one another in the general performance and consolidation of the records achieved last year which was scored above 68% and hope that the proposed 2017 provisions will surpassed the last year’s Budget performance target.

The 2017 Budget focuses on Agriculture, Education, Health Services, Youth/Women Empowerment, Land and Housing and other Socio-economic provisions to all parts of the State, aimed at consolidating last year’s performances.

The next legislative day to flag off the debate for second reading, as moved by Hon. Adamu Hassan Abugi and seconded by Hon. Isah Mohammed , member representing Lavun and unanimously approved by the House.

The bill was subsequently directed to the House committees on Judiciary, Lands/Housing for detailed Scrutiny with relevant Stakeholders, and report its recommendation to the House within one month