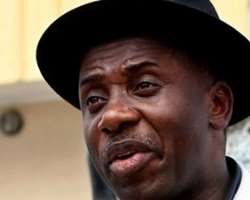 I will not be attending to the issue of if Wike – who supervised the killings in Rivers State before and after he assumed office as the Governor of Rivers State – merits Sun’s award or not. Neither am I ready to expiate if such a character who turned Rivers State to ‘Rivers of blood’ merits the title offered to him by some elements in the Christian Association of Nigeria (CAN), Rivers State branch, as an Apostle of Peace. But in few weeks time, I will attempt to explain to the public the lies contained in the interview by The Sun Newspapers, against an innocent man like Rt. Hon Chibuike Rotimi Amaechi, the former governor of Rivers State and incumbent Minister of Transportation of the Federal Republic of Nigeria by x-raying some sectors of the administration of Amaechi and allow you the reader to judge.

Let me reiterate that Wike’s assessment of his mentor, boss and predecessor in office, Amaechi as that of a colossal failure is laughable, as he, Wike, was not only a part of the engine room of Amaechi’s administration but a key actor. Coming back to write off an administration whose impact on the lives of people of Rivers State had been described in some quarters as the golden age of Rivers State – only comparable to the administration of Alfred Diete-Spiff, first military administrator of old Rivers State – is not only an attempt to rewrite a history that is still alive to most of us, but a very callous, malicious, satanic, wicked, sad and unfortunate attempt by a mind that needs an immediate health attention.

Because of the much falsehoods, misrepresentation of facts, and turning facts upside down in order to achieve a devious and sinister agenda, it behoves on some of us that monitored not only the eight years administration of Amaechi, but who also worked very closely with Governor Wike, to straightening the facts and save the general public from the obvious falsehoods contained in this particular interview.

In carrying out this assiduous task, I am challenged by the words of Nobel Laureate and renowned author, Prof Wole Soyinka who, in his famous book, The Man Died, noted: “The man dies in all who keep silent in the face of tyranny.” And to avoid falling into the trap of late Emperor Haile Selassie of Ethiopia’s famous words: “Throughout history, it has been the inaction of those who could have acted, the indifference of those who should have known better, the silence of the voice of justice when it mattered most that has made it possible for evil to triumph.” Others who have benefitted so much in Amaechi’s political sagacity and benevolence may decide to sit on the fence or keep quiet at this critical time, but I have no choice than to defend a misunderstood man by some misguided elements, no matter the cost. And in this my latest attempt to defend and protect the integrity of Amaechi – whose only sin is that he spearheaded the ouster of a clueless president who supervised the looting of our common patrimony with impunity and to such a ridicules level where billions of dollars are housed in the houses of most of his aides, while the entire nation suffers in abject poverty.

Wike’s unfortunate stand is aptly captured in Psalm 41:9: “Even my close friend in whom I trusted, who ate my bread, has lifted up his heel against me.” And Psalm 55:12-14, which says: “For it is not an enemy who reproaches me, then I could bear it; nor is it one who hates me who has exalted himself against me, then I could hide myself from him. But it is you, a man my equal, my companion and my familiar friend; we who had sweet fellowship together, and walked in the house of God in the throng.” The above biblical quotes cannot find a better person than what Chief Nyesom Wike, is currently doing to rubbish and ridicule the personality of ex-governor Rotimi Amaechi, his predecessor, political mentor and benefactor.

What is happening in Rivers State today could also be captured in the words of Lucien Bouchard : “ I have never known a more vulgar expression of betrayal and deceit.” According to Malcolm X, “To me the thing that is worse than death is betrayal. You see, I could conceive death, but I could not conceive betrayal.” In line with this fact of life among civilised people and happenings in Rivers State, an illustrious son of the state and one time Minister of Petroleum Resources, Prof Tam David-West, aptly described Amaechi’s “orchestrated travails” as unfortunate, in view of the fact that Amaechi has worked hard enough in restoring the glory of Port-Harcourt, also known as the Garden City of Nigeria.

For the avoidance of doubt, I served as a media aide to Wike, when he acted as the Director General of the Amaechi’s Campaign for his 2011 re-election. It was his position that I should head the Media Team of the campaign Team, instead of serving as a member of the Media Campaign Team. As our Director General, I did an article titled; Anya-Neli,in which I profiled and mentioned his type of politics. And I know that up till now nobody has done a better article on him than that article. I have to state this fact for the first time, just because of some of you that will be reading this article and thinking that I am either judgemental or biased. It is a common fact that most of Governor Wike’s current aides are not closer to him than me, That was why I laughed off those wooing me to Wike, so that I can assist him in his present task of ruining Rivers State, and work against a man who played key role in shaping our political lives, thinking that I have a price tag at my age.

Having stated this fact let me attend to the truism of this article, aimed at straightening the facts about the administration of ex-governor Amaechi. Though it will be foolhardy for anybody to do justice to the tenure of Amaechi as governor of Rivers State in a single piece but forth with, on a weekly basis, I will be presenting series of Amaechi’s administration stories, sector by sector, in order for the reader to understand the type of politics that Wike is now playing in Rivers State.

Before doing this, let me unequivocally state what Wike’s statement that Amaechi’s eight years as a Governor of Rivers State was a waste, entails:

2. He turned most of the schools built by Amaechi into hideouts for criminals, and reverted pupils and students to schools already discarded.

3. Amaechi’s free scholarship scheme to the people of Rivers State from primary to university level was maliciously uprooted and stopped by the Wike’s administration.

1. The result of the peaceful state of Rivers State under the watch of Governor Amaechi resulted not only in attracting foreign investments that Port Harcourt became the haven of both international and national championships. Apart from hosting one of the best-organised National Sports Festivals ever in Nigeria, the School Sports and the Police Games by March 2013. Port Harcourt, apart from Abuja and probably Lagos was the only state to have hosted US-Nigeria biennial National Conference, Pan African Parliamentary, Garden City Literary Festival, hosted CARNRIV involving several foreign countries to showcase the rich culture, potentials and beauty of her people; the second Dr Claude Ake Memorial Lecture, Rivers State Investment Forum and Governor’s Interactive Session with Rivers State Youths.

2. Apart from the above, other major events hosted by Rivers State under Amaechi’s watch include the ION Film Festival where the world’s best film producers were feted with the hospitality of Rivers State; Miss ECOWAS Pageant, Garden City Literary Festival, Guild of Editors, Commonwealth Women Parliamentarians (CWP); a trade delegation from the Economic Community of West African States (ECOWAS) on an enlightenment mission for private companies within the South-south zone, on how to access business opportunities available within the ECOWAS sub region, among many other major events hosted by the Rivers State Government.

Finally, I laughed when Wike and his funny companions presented the following issues – in which he worked assiduously against during the sad regime of Dr Goodluck Jonathan – before the Federal Government, during the visit of the Acting President of the Federal Republic of Nigeria, Prof Osinbajo:

1. Soku Oil Wells must be restored back to Rivers State

2. East-West Road needs to be attended to
3. Development of the Niger Delta
4. Clean-up of the Ogoni oil spill
5. Legalisation of bunkering and refining
6. Synergy between Rivers PDP and APC national
7. Peace and unity in Rivers State.
Thanks to the Acting President, Prof Osibanjo who assured that these issues that Wike collaborated with former President Jonathan to deny the Niger Delta region will be tackled by the President Buhari’s administration

As I stated earlier, I can’t in one piece state who Amaechi is or what he achieved for Rivers State during his eight years rule, but will kick-start the series of Amaechi’s feats in the area of education by next week, pick up the health sector, agriculture, security and other sectors in that order. I will also assist the public by throwing light on the ‘Rivers of blood and Apostle of Peace’, as well as Wike and his betrayal mission against Amaechi.

Let me conclude this treatise by quoting Vice-President, Yemi Osinbajo: “Ameachi is also a man of big ideas and very insightful; he understands how to live long in the hearts of men. His education policies in Rivers State, and all of those children he gave real hope and opportunity ensures that he will always be remembered long after he left this earth.”

Eze Chukwuemeka Eze is a Media Consultant based in Port Harcourt, Rivers State and can be reached through, [email protected] ,