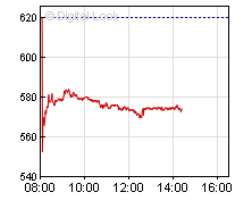 The operator of the UK's electricity and gas networks plans to invest £22bn in the UK over the next five years.

The firm added that its performance in the first weeks of the current financial year had been “encouraging”.

National Grid's chief executive Steve Holiday said it was important to continue upgrading the UK's networks to allow access to renewable sources of energy and secure the country's energy supply.

Announcing the rights issue, the company said there had been “significant developments in the UK energy landscape” over the last four years.

“Environmental targets, legislation, age-related power station retirements and the decline of the UK's North Sea gas reserves are expected to result in a significant change in the generation mix between now and 2020,” it said in a statement.