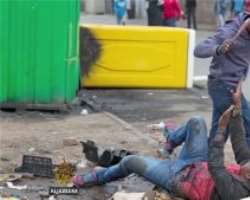 Nigeria has called on the South African Government to take decisive and definitive measures to protect its citizens and other Africans within the country's borders.

The call was made on Monday by the Senior Special Assistant to Nigeria's President on Foreign Affairs and Diaspora, Honourable Abike Dabiri-Erewa.

In a statement issued in Abuja, she described the attacks as an unnecessary setback and advised Nigerians to be extra cautious, saying it appears the South African Government seems to have no control over the attacks.

The Presidential Aide asked Nigerians to refrain from staging reprisal attacks and warned that further attacks without any reprimand may have dire consequences.

“This is unacceptable to the people and Government of Nigeria,” Dabiri-Erewa said.

Attacks and looting of Nigerian-owned businesses in Pretoria West were confirmed by the Nigerian Community in South Africa on Saturday.

Mr Ikechukwu Anyene, President, Nigeria Union, told the News Agency of Nigeria (NAN) on the telephone from Pretoria, South Africa, that the attacks began at 4.00 a.m.

He said that the union had reported the incident to the Nigeria mission and South African police.

“As we speak, five buildings with Nigerian businesses, including a church have been looted and burned by South Africans. One of the buildings is a mechanic garage with 28 cars under repairs, with other vital documents, were burned during the attack. Also, the pastor of the church was wounded and is in the hospital receiving treatment,” he said.

“We began taking precautionary measures when the incident took place today. The attack in Pretoria West is purely xenophobic and criminal because they loot the shops and homes before burning them,” he said.

Anyene called on the Federal Government to persuade its South African counterpart to protect Nigerians in their country.

“These attacks should not be allowed to continue because it is a big setback,” he said.

Meanwhile, the Nigerian High Commission and consulate in Pretoria and Johannesburg have been instructed by the federal government to investigate the xenophobic attacks on Nigerians in South Africa. The Permanent Secretary, Ministry of Foreign Affairs, Ambassador Sola Enikanolaiye, explained that the findings of the probe would be on his table this week.

He advised Nigerians in South Africa to remain calm and law-abiding and assured them that everything would be done to protect them and their properties.

“In terms of what we have done so far, I have asked our mission in Pretoria and Johannesburg to file a full report, to investigate the alleged reported killing so that government would consider what is appropriate to the circumstance,” said Eniokanolaiye.

He stated that the government could not do anything now until it received a full briefing of the attacks, adding that the report of the investigation would be analysed and decisions on appropriate response taken.