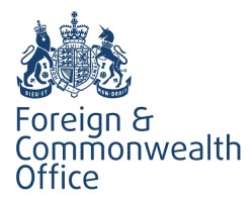 LONDON, United Kingdom, February 20, 2017/APO/ --
The British High Commission in Nigeria has announced the arrival of Laure Beaufils, appointed as British Deputy High Commissioner for Lagos, Laure is the first female to head the UK mission in Lagos. She arrived Nigeria on Monday, 20 January 2017, and already looks forward to the tasks ahead.

Commenting upon arrival, Laure said “I’m delighted to be in Lagos and leading the UK mission here. I look forward to working with a variety of Nigerian partners to further progress the already strong UK/Nigeria relationship”.

Laure Beaufils has been head of the UK Department of International Development in Rwanda since August 2014 where she managed a $100 million portfolio of programmes focusing on economic development, governance and social sectors. Prior to holding this position, she worked in various positions in the UK Government. She was the lead strategic adviser working for the British Prime Minister in his role as co-chair of the UN Secretary General’s High Level Panel on the post-2015 development agenda.

She ran DFID’s department for Overseas Territories. She led a team working on climate change, and also worked for the UK mission to the UN, as first secretary responsible for development. Prior to joining the UK civil service, she worked with the UN and civil society organisations. She also worked with the private sector as a financial auditor. She has lived and worked in Rwanda, Ethiopia, India, Cambodia, France, the UK and the USA.