Why are Dictators Not Able To See Facts 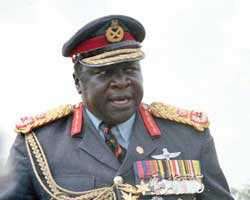 I have been following political decisions of Gambia’s Yahaya Jammeh for the past five years, it has been an interesting venture which have led and could still lead any other observer to the question that, why are dictators not able to see facts the way they are, or what goes on inside the mind of a dictator. For example, Jammeh has been using the political office to serve himself sensuously, without being touched by economic and social problems of his fellow countrymen in Gambai. Poverty and despair in Gambia has never been a source of contrite to him, instead he feels good to be the only strongman among the desperate weaklings. Jammeh could not accept the fact that he has been voted out, he still clung on power, neither could he see the dignity of accepting defeat to hand over power until he is humiliated through a forceful ejection by the ECOWAS military.

This behaviour is not unique to Yahaya Jammeh as an individual, but it is the shared character of all social and political dictators. Failure to see the reality is their main behaviour, and then deriving pleasure from problems of others is their second behaviour. In fact closer examination of dictators like Jammeh leads to a premise that may be dictatorship is more of a medical problem that a political problem. This premise easily gets support from the sub-normal behaviour of Yahaya Jammeh during his last days as President of the Gambia.

The corporate world is not an exception, managers and corporate leaders that are tyrannical will never accept that they are failing the organization. They will never be sensitive to the fact that they are ones making customers to withdrawal and employees to resign. Instead they will cling to their positions until the organization is closed down. Some observers attribute this behaviour of the tyrannical managers to fear, anxiety, love of power and paranoia, but this is not enough.

During their peaceful and formative times Dictators and tyrannical leaders display some level of intelligence, good physique in terms of beauty or good looks and body weight. They are also very eloquent, exudes unique sexual energy, show a lot of ambition, relates strongly with the group but not with individuals and they are very snobbish in their social relations. However, when exposed to any danger beyond the capacity of their physical power most of the dictators usually have no way out ; this is exactly what happened to Jammeh, Gaddaffi, Osama, Hitler, Mobutu, Idi Amin and very many others.

When commending about the mind of the dictators in a forum at Norway, Dr Fallon wrote in Science to-day that dictators are usually charming, charismatic, and intelligent. They brim with self-confidence and independence, and exude sexual energy. They are also extremely self-absorbed, masterful liars, compassionless, often sadistic, and possess a boundless appetite for power.

This is must be some of the psychological reasons why some people spend their lives in the bush as freedom fighters without fearing danger that go with these; they are then celebrated as liberation leaders, only to become tyrannical and very fierce dictators in the long last.

In their Introduction to the Study of abnormal psychology, Durand and Barlow (2009) show that there is a special tissue of the brain called Amygdala found directly behind the eyebrows, this tissue is in charge of regulating behaviours like sexual desire, emotions, rage, war behaviour , clan or tribalistic behaviour , aggression, anxiety and selfish-complacency. When the Amygdala is bigger then the person displays dictatorial instincts, and when the Amygdala is small the person displays non-dictatorial behavior. A person with a big Amygdala does not get pleasure from positive things like a reading a good book or watching the sunset at cape point in south Africa where Indian ocean meets the Atlantic, but instead power, sex,violence, drug and alcohol are likely to satisfy him most, this is why most of the dictators are not good intellectuals. It has also to be noted that Drug addicts and alcoholics are persons with extended Amygdala who did not get opportunity for power to gratify their senses or vent out their energy, hence they are only venting their energy through drug and alcohol abuse.

Historically, leaders like Josef Stalin and Adolf Hitler suffered from malignant megalomania which made them to be power addicts. They would not see their political failings because of their psychological propensity to be easily send high or intoxicated with power, an attempt to make them loose power made them to be more violent in non-normal way. This only confirms that a dictator is more of a medical than a ballot box case, the more he is on power the more he desires more power. The earlier he is removed the better.