McCain on Trump's attacks on media: Dictators get started by 'suppressing the free press' 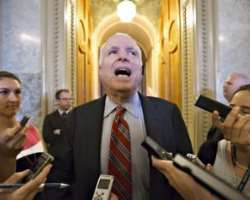 “I hate the press, I hate you especially,” McCain told NBC’s Chuck Todd on Saturday . “But the fact is, we need you — we need a free press. It’s vital.”

McCain was responding to Trump’s tweet on Friday where the president attacked the media as the “enemy of the American people.”

“The FAKE NEWS media (failing @nytimes, @NBCNews, @ABC, @CBS, @CNN) is not my enemy, it is the enemy of the American People!” Trump tweeted. He followed that  with another tweet on Saturday morning , telling his followers not to “believe the main stream (fake news) media.”

“That’s how dictators get started,” McCain said. “They get started by suppressing the free press, in other words, a consolidation of power.”

Trump spent a large portion of his rally on Saturday evening lashing out at the media,  while spewing falsehoods about nonexistent attacks in Sweden and railing against the “dishonest” media for publishing stories with “no sources.”

“If you want to preserve — I am very serious now — democracy as we know it, you have to have a free, and many times adversarial, press,” McCain said. “And without it, I am afraid that we would lose so much of our individual liberties over time.”

McCain added he has “more hope than belief” that a Republican-controlled Congress would thoroughly investigate the Trump Administration’s ties to Russia. Mike Flynn, Trump’s former National Security Adviser, resigned on Monday after he misled Vice President Mike Pence over the contents of a December phone call  with Russian Ambassador Sergey Kislyak.

Though McCain has taken up the mantle of Trump critic, The Washington Post’s Dave Weigel notes that McCain has voted with his party to confirm every Trump cabinet nominee except for Office of Management and Budget Director Mick Mulvaney. And, Weigel adds, Trump thrives off of mainstream Republican opposition.