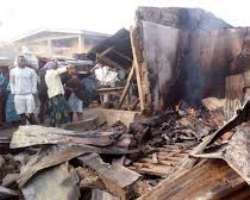 FIVE people, including an eight-month-old baby and two other children aged three and six, were among those burnt to ashes when a suspected lunatic set his family house ablaze in Kisi, Oke Ogun area of Oyo State.

The suspect, Monday Daniel, who is now in police custody, was said to have committed the crime in the early hours of Sunday, when his family members were all asleep. While confirming the incident, the state Public Relations Officer, SP Adekunle Ajisebutu, gave the names of the dead victims as Blessing Samuel Ode, 3; Friday Samuel Ode, 8 months; Mummy Ogbada, 10; Daddy Ogbada, 6, and Ogunma Ogbada, 46.

According to Ajisebutu, the suspect, when interrogated, said he did not know what came over him. Ajisebutu said: “Tragedy struck about 2:35a.m. yesterday, when a suspected lunatic, identified as Monday Daniel, set the house of his family at Budo Alaka village, Kisi in Oriire Local Government Area of the state, on fire while the family members were asleep.

According to an eyewitness, the suspect had, the previous day, approached a member of the family for some money to travel to an undisclosed destination, but the request was turned down.

Angered by this, the police said the suspect allegedly came back in the early hours of yesterday and set the thatched-roof house on fire. The suspect was said to have escaped the scene afterwards, but was later arrested by police. According to the eyewitness, “on interrogation, the suspect confessed to the crime, but claimed he did not know what came over him. The case will soon be transferred to the Criminal Investigation and Intelligence Department, Iyaganku, for further investigation.” Vanguard