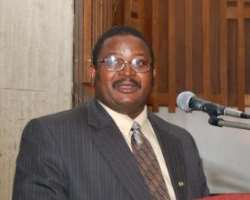 Former Group Managing Director of Nigeria National Petroleum Corporation Andrew Yakubu has asked the Federal High Court in Kano to set aside the forfeiture order it gave last week in respect of the sums of $9,772,800 and £74,000  seized seized from his home.

The federal court had made an interim order for the forfeiture of the monies to the Federal government.

But the former GMD  of NNPC would not have it. He has  approached the Federal High Court in Kano urging it   return of the money to him.

Yakubu who  made the request through his counsel Mr. Ahmed Raji,SAN  questioned the jurisdiction of the court  to even entertain the matter since the alleged crime was committed in Abuja

In his Motion on Notice,Yakubu's counsel,Raji asserted that “No aspect of the perceived offence in respect of which the Order of 13th February, 2017 was made, was committed within the Kano judicial division of this Honourable Court”.

Also, the stated that  the Federal Government lacked  the locus standi to seek the interim order of the court  which was granted on 13th February, 2017.

He said,”By Section 28 of the EFCC Act, only the commission, i.e. the EFCC has the vires to seek an Order for the interim forfeiture of property under the Act. The power of this Honourable Court to make interim forfeiture Order(s) pursuant to Sections 28 & 29 of the Economic and Financial Crimes Commission Act, 2004 (hereinafter “EFCC Act”) is applicable ONLY to alleged offences charged under the EFCC Act and not to offences cognizable under any other law.

“The ex-parte Order of this Honourable Court dated 13th February, 2017, was made in respect of alleged offences under the Independent Corrupt Practices and other Related Offences Commission Act (hereinafter “ICPC Act”) and not the EFCC Act as prescribed by Section 28 & 29 thereof.

Raji further averred that the combined effect of Sections 28 and 29 of the EFCC Act is that a charge alleging infractions against the provisions of the EFCC Act ought to be brought against a suspect before the powers of this Honourable Court under Sections 28 & 29 of the EFFCC Act, to order for  interim forfeiture of property, can be actuated.

According to him, in the absence of  a formal charge, no prima facie evidence can be established in order for the provisions of Section 28 and 29 of the EFFCC Act to be actuated.

“In the instant case, no charge was brought against the Respondent/Applicant before the provisions of Section 28 and 29 of the EFCC Act were activated to grant the ex-parte Order of 13th February, 2017.”

Without doubt, millions of Nigerians will be watching to see how this Dollar saga will  end  given   its unique nature.