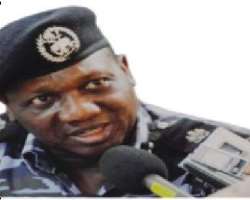 The police are establishing tracking units in Lagos and Rivers states immediately to check the growing rate of kidnapping in the country.

The facilities for the purpose are already being installed and should be active in the next few weeks, Police  Inspector General  Ibrahim Idris told reporters and activists in Lagos.

He said the installation of the machines in both states would help in reducing the pressure on those in Abuja and also enhance the police anti-kidnapping drive.

The tracking machine, he said, is already proving its worth by helping to resolve about 90 per cent of kidnap cases so far, with victims rescued and suspects arrested.

The Port Harcourt machine will handle cases in the South-South and South-East, while that of Lagos will take care of the South-West.

He solicited the support of the public in dealing with crimes in the country.

On plan to check insecurity, he said: 'Very soon, we are going to have a national security summit. Kidnapping seems to be a community problem.

'Over 90 per cent of victims have been rescued. I agree that it is becoming a major challenge. It cuts across the entire country. It has to be addressed in various forms.

'It is not just the police or security agencies. Take, for instance, when the Turkish School students were kidnapped. That school is situated at the foot of a swamp. Despite that parents paid a huge amount of money, the school didn't invest much in security.

'So, we are going to use the summit to address these issues as well as others like the herdsmen and farmers issues.

'These issues are further dividing us as a nation and we need to solve them.

You cannot have the maximum support of security in an area without the support of the public. Everybody has one thing or the other to make our society safe.'

Idris hammered on the need for the media and civil society to be advocates of improved funding for the police through the Police Trust Fund.

He said: 'The funding of the police is costly. What we are trying to do is pursue 50 per cent of our budgetary requirement from other sources. We are also looking for other avenues where we can address the problem of the police.

'We are hoping that the National Assembly would pass the Bill establishing Police Trust Fund in order to open up other sources for the police to generate money. It is possible. It is already happening in Lagos (Security Trust Fund) and has been working wonderfully.

'We are aware that the federal government is financially constrained and so, we don't think it is right to overburden the system by creating other agencies which would require funding and creates rivalry. But if more money is provided and more people recruited, we can achieve so much more.'

Idris also stated that there were plans to professionalise the police by establishing specialised schools for training.

He urged civil society organisations to support the police in training its personnel on professional conduct.

Appealing for better funding, he stated that of the N300 billion allocated to the police in the 2016 budget, only N4billion was eventually released.