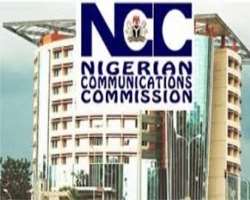 The Nigerian Communications Commission (NCC) yesterday raided the shops and kiosks of agents of telecommunications companies engaged in indiscriminate registration of SIM cards in Abuja metropolis and its environs.

Three operators were arrested while about seven registration machines were confiscated by security agents who accompanied officials of NCC on the assignment.

Alhaji Salisu Abdu, head of enforcement unit of NCC told journalist that the raid was justified following series of warnings issued to the agents on the illegality of their actions.

He insisted that those arrested would pay the stipulated fine of five million naira for the offense.

His words: 'The purpose of this exercise is to stop indiscriminate registering of SIM cards by agents of telcos. You are all aware that NCC issued a directive to all mobile operators to from February 1, 2017 provide a controlled environment for registration of SIM cards. This controlled environment means a permanent structure; a structure that can be traced, a location that can be identified and also that the registration agent manning this centres are expected to have identity as well.

'Today, in view of the fact that deadline has ended on February 2, the NCC team is going to ensure that no any agents are doing the registration outside the controlled environment. We went to Gwanripa Gate and some other places around the place. All the three we arrested today were doing the registration in an uncontrolled environment; they were doing that under umbrellas and in kiosks.

'A controlled environment must have seven features:  it must be clearly delineated for that purpose, it must be a permanent structure; a building, it must have the logo of the operator and others.

'It is not our responsibility to carry out publicity on this matter. It is the responsibility of the operators to do that because they actually engaged the agents. They should have told them what we have directed them to do.  Adequate time has been given to the operators. The directive has been given since November 2016 that is barely four months.

'It is not for the operators to arrest these agents, it is the work of NCC to carry out the enforcement of its regulations and directives. We must ensure that those who breach the directives should face the law.

'As at the moment we have arrested three violators and seven registration machines are impounded. So further investigation would be conducted by the Nigeria Police and I believe through that we will able to trace the dealers who have assigned the agents.

'Contradiction of the directive would attract N5million per day and as long as you refuse to pay the N5m you be incurring addition N500,000 per day'.