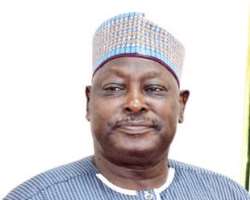 The Secretary to the Government of the Federation, Babachir Lawal, has given a hint of the possibility of President Muhammadu Buhari seeking a second term in 2019.

Lawal gave the hint while addressing a pro-Buhari crowd gathered at the Unity Fountain, Abuja, on Tuesday, at the beginning of a series of protests in support of the President.

He told the crowd that President Buhari feels the pains of Nigerians and was encouraged by the show of support to work to improve their lot.

According to him, the President did not envisage the enormity of the challenges he met on the ground but was doing all within his power to set Nigeria on the path of sustainable growth.

He assured the protesters that the economic difficulties being experienced by Nigerians would disappear within 'one year.'

Lawal said, 'I'm here to thank you for the support you have been giving to this government. As a government, we are encouraged by your support. It is this type of support that encourages the President to do more.

'We want to assure you that this government is on top of the situation. As much as we understand the challenges that we are facing, there is no cure without medicine.

'It is for no reason that quinine is very bitter, but after you have taken it, you get well. I assure you that by the grace of God, in the next one year, Nigeria will have a booming economy. We know what they were doing to try to sabotage the activities of government to bring Nigeria back to economic prosperity, they will fail.

'Nigeria will never go back to the position it was before 2015. The foundation being laid by the government is solid. And nobody, even after the President has finished his eight years, can ever take us back to the pre-2015 days.'

He expressed optimism that President Buhari would outlive those who wish him dead.

Also addressing the crowd, the Senior Special Assistant to the President on Media and Publicity, Malam Garba Shehu, apologised for an earlier face-off between the Buhari protesters and security agents at the gate of the Presidential Villa; he blamed the situation on 'a communication gap.'

In his address, Mr. Moses Abdullahi, who is the convener of the Citizens Support for Good Governance in Nigeria, the organisers of the event, absolved the Buhari administration of blame for the current difficulties Nigerians are passing through.

He said 'Nigeria is going through a difficult phase, a phase which is not the making of this administration. It is rather a consequence of decades of bad governance, decay and maladministration by a few under a banner now synonymous with corruption.'

'Nigeria can only change when we support the government and do our bit and not allow ourselves to be used as agents of destruction and political thuggery.'

He listed some of the achievement of the Buhari-led administration to include the improvement of security especially in the North-East, successes recorded in the war against corruption and improvement in Nigeria's positive image among the comity of nations. – Punch.