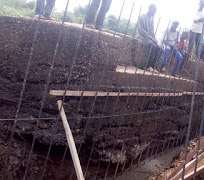 FOR almost half a century, they have been living in isolation, and still sentenced to a life of misery. It is not their fault. It’s a glaring act of sheer neglect, and abandonment by government. Successive governments only made promises, a seeming fake promise of rebuilding the Ukpagada Bridge in Ogoja Local Government Area of Cross Rivers State. Nothing is happening yet, and the misery of the electorate there continues. The only bridge linking the community with the outside world that was built by the British in the cause of colonialism, was bombed by Nigerian troupe during the civil war of 1967/70. Since then, the incident has been fueling poverty, environmental degradation, threat to life, and the like, in Ukpagada.

It is only a stony heart that will refuse to bleed as the local people narrate their ordeals to us as we listen to their testimonies: They talk about how they are detached from the rest of the world since the bridge was bombed, and that not until this year, Dr. Ray Ugba Morphy, a public spirited individual who hails from Ogoja, takes it upon himself to rebuild the bridge. Their Ordeals
In 2016, at about midnight, Mrs. Elizabeth Sunday, 28, was in severe labour at home. She did not anticipate it. The family needed the Ukpagada Bridge to take her to the nearest health professionals. But the bridge was not there. They had to resort to an unscientific method to save her. Many like Mrs. Sunday in needed urgent medical attention never lived to tell their stories.

The bridge connects other nearby communities like Bakor and Nkum. Since she couldn’t be taken to health professionals, the expectant mother had to deliver at home. “It was a harrowing experience and I could have died if not for providence. Although, I survived during the cause of giving birth but some others were not lucky, due to the out-of-the-way road caused by man,” she says.

Her experience also re-echoes in the neighbouring local government areas like Obudu, Yala, Ikom, Etung, Boki, Abi and Biase, all in the same Cross River. John Obo, an entrepreneur says, “Businesses are collapsing and human rights are trampled on because of the Bridge.”

The community is suffering from a long neglect by government, which has resulted to untoward flooding last year that damaged many of the towns and villages, because there’s hardly any proper drainage constructed.

“In October, seven local government areas in the state were wrecked by flood resulting to hundreds of thousands of people rendered homeless and over two hundred farms washed away. Farmlands that included rice, yams, cassava, cocoa, cucumber, palms, vegetables and others were mostly affected by flooding,” says Peter Jonas, a village head.

When the Director General of the State Emergency Management Agency, SEMA, Mr. John Inaku evaluated the adversity, he awestruck the people that climate change was the culprit for the flood debacle. “The disaster was as a result of climate change as envisaged by Nigerian Meteorological Agency, NIMET,” he said.

Some of the residents nonetheless feared that the flooding was as a result of government neglect of overflowed bank of Aya River that crisscrossed the northern part of the state. This was even as Mr. Inaku gave the people hope that government was making sure that the victims did not lack. Succour Coming At Last!
Moved by the tales of woes of the community, Morphy has taken the bull by the horns. On January 12, 2017 he offered to renovate the bridge with his personal resources.

“I decided to reconstruct the Ukpagada Bridge given its chronological archives, no matter the cost. It is not about showing off that I am wealthy; it is about knowing the true meaning of essence,’’ he says.

Adding, he says, “I learned that the Bridge was built by the British in the cause of colonialism in the country called Nigeria today and was bombed by the Nigerian troupe fighting with the Biafran side during the 1960-1970 war in the country.

“While that project has been taken, all well meaning sons of Ogoja and indeed those of Bakor extraction, should know that we still require to put a grader on that road that has been reduced to a motor-bike highway for over 47 years of neglect.”

Morphy who last year quitted Governor Ben Ayade’s job as Special Adviser, Strategy and National Contact, due to some pressing differences, on January 29, said, “I am delighted to inform all those concern that an Ogoja daughter in the UK and a member of the royal Morphy family, Mrs. Paulina Morphy-Fogg and her dear husband, Eric Fogg, have both decided to follow the pathway set by their brother (me) to undertake the construction of the second mini bridge to push further the connectivity link between Ukpagada and the world.

“The project is set to commence in the next two weeks as all necessary logistics shall be carried out to ensure a smooth take off.” Hopefully, the likes of Mrs. Elizabeth Sunday will not have to go through what her family and she went through during labour again. They will not deliver their babies in the bush again as there are prospects of motor vehicles conveying them to health facilities, and economic activities coming alive again courtesy of the kind gesture of Ray Ugba Murphy.

Odimegwu Onwumere is a Poet, Writer and Consultant based in Rivers State. He contributed this piece via: [email protected]