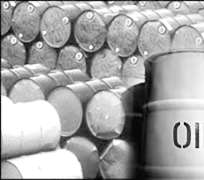 Barrels of crude oil
A boost in oil supply in Nigeria's Niger Delta region has resulted in the highest economic growth rate for the West African region in the African continent in the last one year, according to an annual economic report of the United Nations just released in New York.

The UN news release made available by Empowered Newswire on Wednesday, said, 'Growth was highest in West Africa at 5.5 per cent, partly as a result of a boost in oil output in the Delta region of Nigeria, following the reduction in hostilities.'

The reduction in the hostilities in the Nigerian oil producing region of Niger Delta, according to the UN news bulleting, was traced to the Amnesty Programme of the Federal Government, initiation had commenced just before the illness of the late President Umaru Yaradua. Nigeria's new President Goodluck Jonathan has also promised to speed up the implementation of the programme.

The report titled, 'Promoting High-level Sustainable Growth to Reduce Unemployment in Africa,' was released on Tuesday at the New York headquarters of the world body. It was published jointly by the UN's Economic Commission for Africa and the African Union Commission.

According to Empowered Newswire, the report revealed 'considerable onsiderable regional variations in growth in 2009 across African regions and countries.'

While growth was highest in West Africa because of the rise in oil production in Nigeria, East Africa posted a 4.3 per cent growth, much higher than the earlier estimate of 3.9 per cent, while North Africa posted a GDP growth rate of 3.6 per cent, according to the ECA Economic Report 2010.

The UN said, 'The worst hit region was Southern Africa where GDP declined by 1.1 per cent, followed by Central Africa with a paltry 1.8 per cent growth rate.'

But in all, high unemployment rates continue to hinder poverty reduction efforts in the continent, prompting the United Nations to urge African countries to give priority focus 'to diversifying their economies to create decent jobs to boost social development.'

'Africa's long-term growth prospects and ability to sustain high rates of employment generation and broader social development depend on success in economic diversification,' according to the Economic Report on Africa 2010.

The current global economic crisis offers African countries an opportunity to lay the foundation for sustainable, employment-intensive economic growth, according to the report.

Rob Vos, Director of Development Policy of the UN Department of Economic and Social Affairs, said at the UN while presenting the report, that 'the recession should work as a wake-up call for Africa to deal with its vulnerabilities and introduce further reforms to promote growth, but more particularly employment creation to promote social development in the region.'