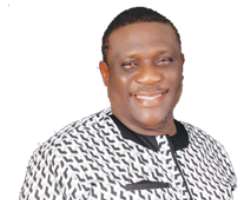 After fathering about 19 children from seven women, during his time in the limelight, Felix Aigbe Liberty, the lover boy 'old school' singer-turned- pastor is back  in the news.

The pop singer has launched a campaign to discourage young men from marrying more than one wife,  saying 'polygamy  almost ruined my life.'

The pop singer, who described polygamy as a 'sin' said, he's taking the campaign across the globe.

According to him, 'Polygamy is the behaviour of the negatives, it's not Godly.'

He said, 'I got myself involved with seven women that had 19 children for me. I am telling everyone that cares to listen that it was a demonic experience I had.'

In a recent chat with Sidebeat, Liberty said, it was God that saw me through, adding 'I wouldn't wish even my enemy to undergo what I went through in the name of having children from different mothers.'

He  said,  'Anything that is not in line with the word of God is a sin. Polygamy is not ordained by God. It is a man made act to dominate the woman. The woman does not have a say, not because she doesn't want to protest but because nobody would listen to her. There is need for us to create awareness about the dangers of running a polygamous home. Take a look at my life today, the confusion that I am having today is because of this polygamy. This is because I was born into a polygamous home, it has been war all the way. We must put an end to polygamy. The Holy Bible said, a man will leave his father and mother and be joined to his wife and they will become one flesh. Two women are crowd to a man. When you have two women in your life, there's bound to be confusion and when there's confusion, there will chaos and once there's chaos, there must be death. A man that goes into polygamy is a man that doesn't think straight,' the pop singer warned.

The Edo State-born lover boy, who ruled the airwaves in the 80s, with his hits songs such as 'ChiChi', 'Ada' and 'Ngozi', is apparently advocating, 'one man, one woman' practice. While he was in the limelight, Liberty got himself involved with different woman and ended up fathering about 19 children from seven of them.

Even though, he's living in regrets, owing to his past mistakes, Liberty is putting plans in place to officially flag off the campaign in Lagos, and later, in Abuja and across the world.

Recall that Felix Liberty, while he was the man of the moment, in the 80s, was a ladies man. He ruled the airwaves in 1989 with this single, 'Ifeoma', a song he's known for in decades to come. After the 1992 release of his album 419 which didn't do well in the market, he ended his music career, returned to Nigeria after five years of sojourning in the United States, and gave his life to Christ. – Vanguard.