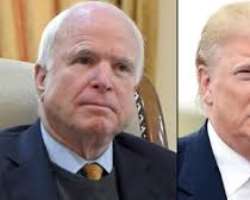 President Trump unleashed a furious tirade against Vietnam veteran Sen. John McCain, R-Ariz., on Thursday morning amid their ongoing dispute over the White House's characterization of a recent military raid targeting al-Qaida terrorists as a success.

According to McCain, the Jan. 28 intelligence-gathering raid in Yemen should not be considered successful because it resulted in the death of a Navy SEAL: Chief Petty Officer William “Ryan” Owens. He said this does not in any way diminish the courage of the troops involved.

In his Thursday tweetstorm, Trump bashed McCain for his history of “losing” and accused the senator of emboldening “the enemy” while getting the U.S. “bogged down in conflict all over the place.”

The day before, White House press secretary Sean Spicer suggested McCain should apologize, but McCain rebuffed the request. In a statement, he provided an example from the Vietnam War when fellow soldiers unsuccessfully tried to rescue him and other prisoners of war from a North Vietnamese prison.

“Unfortunately, the prison had been evacuated. But the brave men who risked their lives in an effort to rescue US prisoners of war were genuine American heroes,” he told NBC News . “Because the mission failed did not in any way diminish their courage and willingness to help their fellow Americans who were held captive.

“Mr. Spicer should know that story.”
That set the stage for Trump to pounce Thursday morning.

Not one to balk at an opportunity for personal insults, Trump said McCain, whose 2008 White House bid was unsuccessful, has been losing for such a long time that “he doesn't know how to win anymore.”

Julie Tarallo, a spokesperson for McCain, released a statement responding to Trump's latest “ragegasm”: “Senator McCain will continue to execute his oversight duties as Chairman of the Senate Armed Services Committee and support the brave men and women serving our nation in uniform.”Although Trump and McCain have already had a rocky relationship, the latest quarrel grew from Spicer's critique of “anybody who says” the raid was unsuccessful shortly after McCain called it a failure.

“It's absolutely a success, and I think anyone who would suggest that it's not a success does disservice to the life of Chief Ryan Owens,” Spicer said. “And anybody who would suggest otherwise doesn't fully appreciate how successful that mission was.”

When asked to clarify whether his critique was directed at McCain, Spicer replied, “I think anybody who undermines the success of that [raid] owes an apology and [is] a disservice to the life of Chief Owens.”

This is not the first time Trump and McCain have butted heads. In July 2015, as a presidential candidate, Trump insisted that McCain was not actually a war hero. “I like people that weren't captured,” he infamously quipped.

McCain, a prisoner of war in North Vietnam from 1967 until 1973, is a decorated veteran who declined an offer from his captors to be released early while his fellow soldiers remained behind. “I knew that they wouldn't have offered it to me if I hadn't been the son of an admiral,” McCain explained, according to a 2007 Arizona Republic profile .

In August 2016, McCain also rebutted Trump when the Republican nominee attacked a Muslim Gold Star family who had criticized him at the Democratic National Convention.

“While our party has bestowed upon him the nomination, it is not accompanied by unfettered license to defame those who are the best among us,” McCain said of Khizr and Ghazala Khan, whose son died serving in Iraq.