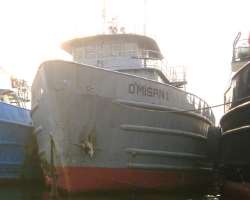 While handing over the suspects to the EFCC, Commodore W. O Kayoda, Commander of NHS PATHFINDER said that, the suspected oil thieves were arrested on 6 February, 2017 by the Nigerian Navy Ship (NNS) PATHFINDER patrol team deployed for Anti-Crude Oil Theft/ Illegal Oil Bunkering operations around Taraba Jetty, Borokiri, Port Harcourt, Rivers State. They were arrested with one vessel: MV OMISAN 1 and one wooden boat. The suspects, who were crew members of MV OMISAN 1 and the wooden boat were arrested in the process of transshipping an estimated 60,000 litres of suspected illegally refined Automated Gas Oil, AGO, from the wooden boat to MV OMISAN 1.

The suspects will be arraigned in court as soon as investigation is completed.