EFCC: I have no hand in your travails – Masari tells Shema 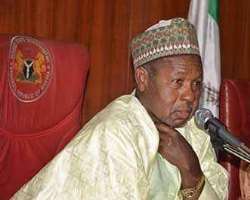 Katsina State Government has debunked allegation it is behindarrest of former governor, Ibrahim Shema, by operatives of the Economic and Financial Crimes Commissions (EFCC) at the premises of the state High Court on Tuesday.

A statement signed by Senior Special Adviser ( Media) to Governor Aminu Masari, Abdu Labaran Malumfashi, yesterday, said the allegation by Shema's media team was nothing but tissue of lies.

In a statement made available to Daily Sun, in Kano, Malumfashi said 'neither the Judiciary nor security agencies take orders from the governor, and, he does not interfere in the work of other arms or agencies of government either at the state or federal levels.'

Malumfashi sought to set the records straight and explained that, 'governor Masari has no need to interfere with the Judiciary since he has set up a Judicial Commission of Enquiry, under the chairmanship of a federal High Court Judge, Justice Mohammed Suraj, with unfettered mandate to interrogate the inexplicable disappearance of tens of billions of Naira, from the state's treasury during the administration of Ibrahim Shehu Shema.'

Pointing out that Shema's media team's statement against his principal was full of contradictions and falsehoods, Malumfashi noted that ' the former G

governor, more than most people, knows very well that governor Aminu Bello Masari is not vindictive.

'Let us make it clear that, no amount of attempts at blackmail, subtle or obvious, will deter or distract governor Masari from making good the mandate given to him voluntarily by the people of Katsina state in the most free and fair election ever conducted in the state, nay, the country.'

Masari's media aide added that 'our advice to the former Katsina state governor is that he should be man enough to bear his cross without trying to drag governor Masari into the cesspit of the judicial travails he willfully got himself entangled.

'And, if the former governor is seriously desirous of locating the source of his adversity, all he needs to do is to look at the mirror and he will have his answer standing before him.'

Shortly after his appearance at the state High Court on Tuesday, February 7, a statement signed by head of Shema's media team, Mr. Oluwabusola Olawale alleged that 'an attempt was made to abduct the former governor at the premises of the Katsina state High Court by security agents who were suspiciously working for by governor Aminu Bello Masari and his aides…'