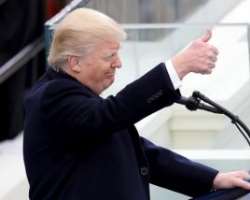 From Cosmopolitan
The Public Policy Polling (PPP) released the results of their latest national poll and it shows more than a third of the country wants to see President Trump impeached.

“Usually a newly elected President is at the peak of their popularity and enjoying their honeymoon period after taking office right now,” Dean Debnam, President of Public Policy Polling, said in a press release . “But Donald Trump's making history once again with a sizeable share of voters already wanting to impeach him, and a majority of voters wishing they could have Barack Obama back.”

With more and more unpopular Executive Orders coming out of the White House, it’s hard to think the number next week won’t be higher.