A RUINED RUNWAY AND A DOSE OF COMMON SENSE! 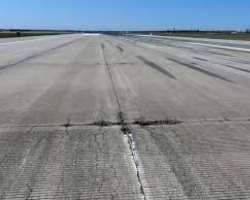 By all means the most vital part of an airport is its runway. Navigational aids come next...for before the deluge of such technological devices, pilots substantially depended on the compass, a retinue of paper maps, their eyes and tons and tons of common sense!

The federal government of Nigeria recently announced its plans to close the Abuja International Airport temporarily so that its decrepit runway may be fixed...as Kaduna Airport has been upgraded to hold forth.

As the Abuja- Kaduna expressway is given a facelift so is the new and improved standard- gauge railway linking both cities...plus a mobile control tower to be shifted to Kaduna.

Yet, many Nigerians as propelled by the Senate keep grumbling about this temporary inconvenience as landing gears are being yanked off commercial airplanes by this damaged and dangerous runway!

They say there is traffic gridlock on the expressway but as government moves to beef up security, they complain about the time.

It was wrong for previous administrations to have neglected the runway at the Nnamdi Azikiwe International Airport in the nation's capital city for so long but when a runway goes beyond periodic patchworks, persistent "patch-patch" is a sure call for disaster!