I am not in position to disclose Buhari's health status: VP Osinbajo 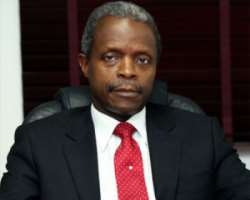 Acting President, Yemi Osinbajo,  said Monday that only President Muhammadu Buhari is in a position to disclose his health status to Nigerians.

Osinbajo however assured Nigerians that the president would speak to Nigerians at the appropriate time.

The VP dismissed every suggestion that he was being pressured to resign by some cabals within the ruling All Progressives Congress.

Osinbajo, who  spoke with State House correspondents shortly after meeting behind closed doors with the National Chairman of the All Progressives Congress, John Odigie-Oyegun, said  he was not in any way under pressure to resign..

While saying the President is hale and hearty, Osinbajo said he spoke with him earlier in the day to keep him abreast of developments regarding the 2017 Budget and the protests embarked upon by some Nigerians.