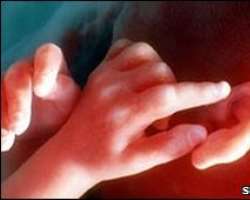 The virus can spread from mother to baby
A campaign is being launched to try to enlist public support to ensure no more children are born with HIV by 2015.

It is the work of the Global Fund, which uses donations from governments to fight HIV, TB and malaria.

The Born HIV Free campaign comes at a critical time, with the fund seeking donations of up to $20bn over the next three years.

It recognises this will be a battle, as governments deal with the aftermath of the Greek financial crisis.

HIV can be passed from mother to child during pregnancy, labour or breast-feeding.

This type of transmission has been almost wiped out in countries such as the UK, because pregnant women who test positive for the virus that causes AIDS can be treated with drugs.

Other measures – such as giving birth by caesarian section – help stop HIV being transmitted to the baby.

But in developing countries, 430,000 children are born with HIV every year.

International effort
The Global Fund already channels more than half of international resources used to prevent mothers passing on HIV.

It believes that the goal of ending this type of HIV transmission by 2015 is achievable – if governments feel they can pledge money with the support of their electorates.

Its executive director, Professor Michel Kazatchkine, said: “We can win this battle against Aids if we get the funding we require.

“This campaign is intended to encourage people to sign up in support of the Global Fund, and to show their leaders that there is strong public support to continue and increase funding for its mission.”

Endorsement
The campaign has been overseen by the French first lady, Carla Bruni-Sarkozy, who is an ambassador for the Global Fund.

Her voice urges people to lend their support in a series of films, with music by Amy Winehouse and U2, which are being promoted on the internet.

The logo has adapted the visual imagery of the red ribbon – long associated with AIDS awareness – to symbolise a mother and child.

The US is the biggest donor to the Global Fund. The UK has pledged or contributed $1.1bn since the fund began in 2002. France is the largest European contributor.

The next round of donations will be confirmed at a crucial meeting in October, chaired by the UN secretary-general Ban Ki-moon.

Insiders at the Global Fund are waiting to hear how the new coalition government in the UK will respond to the request for commitments.

They say they have previously had “promising noises” from the Conservatives and Liberal Democrats on global health issues.

The editor of the Lancet medical journal, Dr Richard Horton, said: “An early indication that our government will support the Global Fund is really important.

“It's something that has worked – because the money has been spent on drug treatment and bed nets.

“Another pressing issue is taking a serious look at the Department for International Development.

“There is genuine concern that a lot of money has been spent on development aid – without always getting a clear return.

“There needs to be accountability at this time of financial stringency.”