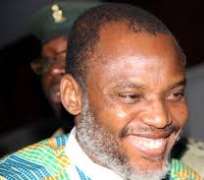 It will be recalled that at the Consultative Forum of ADF Elders held in Enugu on March 29, 2016, a Communique was issued stating clearly ADF position on the on-going global agitations for Biafra under the aegis, particularly of the Indigenous Peoples’ of Biafra (IPOB). ADF had expressed grave disappointment over the discriminatory way the Federal Government has been handling the case of the detention of Mr Nnamdi Kanu, the leader of the movement, despite calls for his release by local and foreign governments and organizations and despite the fact that several courts in Nigeria have ordered for his release from detention.

ADF regards the treatment of Mr Nnamdi Kanu and the reaction to the renewed agitation for Biafra as discriminatory when compared to the attitude of the Government to Boko Haram armed separatist insurgency. Government is known to have sought and indeed negotiated with the Boko Haram insurgency which has claimed and continues to claim thousands of lives of civilians and security forces and destroyed millions of private and state property. In the case of non-violent pro-Biafra IPOB which employs peaceful and non-violent methods of agitation, the Government of President Muhammadu Buhari is unwilling to negotiate or even to dialogue with them.

Since his detention there have been national as well as global reactions in the form of petitions, picketing and demonstrations in all the continents of the world by citizens of all races as well as appeals from several governments for his release..

In Nigeria, Governments and leadership of various zones including political leaders, business men, intellectuals, traditional rulers, human rights groups, lawyers, pan-national organizations from within and outside the Southern parts of Nigeria have appealed to the Government of President Muhammadu Buhari to release Mr. Kanu, whom, everyone has seen, is an unarmed, non-violent prisoner of conscience.

The unrelenting spread of national and global sympathy for his release is premised on the fact that his campaign for the Biafra cause is both non-violent and does not violate any known national or international laws, but rather is protected by the fundamental constitutional rights of freedom of speech and political agitation, guaranteed even by the Nigerian Constitution.

Given the national and global reactions against Mr. Nnamdi Kanu’s unlawful detention, one would expect the democratically elected Government of President Buhari to have released him long time ago, and at the same time investigate the root-cause of his claims in the name of Biafra and the people of Biafra. It is the failure to release an unarmed non-violent political agitator that has led to several cases of shooting and killing of innocent civilians, particularly the youths and wounding of many more in several parts of the South-East and South-South zones of Nigeria.

ADF maintains the view that Separatist demands, especially when it is a case of yearning for political freedom is hardly eliminated through the use of physical force; rather a political solution involving dialogue and negotiation are a historically hallowed path for dealing with such a situation. And if the present Government is willing to follow this path in dealing with the Boko Haram and the Niger Delta Militants, why not the IPOB and the MASSOB?

The purpose of the ADF delegation was to meet Mr Nnamdi Kanu on whose behalf and on behalf the cause he is fighting for, ADF has taken public position. ADF delegation came out of the meeting with Mr Kanu with a conviction that the young man is driven by genuine love for justice, equity and freedom. He represents a generation of Nigerian youths from different zones of Nigeria, who feel the Nigerian Federation lacks the basic ingredients of democracy and rule of law, and the basic norms of a normal human society. THE DEMAND FOR RENOGOTIATING THE FOUNDATIONS FOR THE EXISTNCE OF THE NIGERIAN FEDERATION has been a perennial agitation by all the different ethnic nationalities as well as all those who wish for a peaceful co-existence among the various ethnic nationalities in the Nigerian Federation.

These youths are crying for justice, equity and freedom. Mr Kanu is a product of the Igbo society, very cosmopolitan and hospitable in culture and character, that finds a home where ever they sojourn, with the philosophy of “Oje mba enwe ilo!” The traveller has no enemies. It is this philosophy that makes Ndigbo the greatest investors outside their ancestral home in Nigeria.

The ADF delegation told Mr Kanu that ADF will do all that is within its powers to liaise with Igbo leaders and all other lovers of freedom, justice and equity in Nigeria and around the world to work for his release and impress on the Government the need to adopt a political solution to his case and the cause he is fighting for.