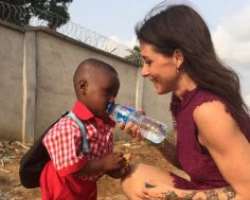 Hope had been abandoned by his parents, who thought he was a witch, and spent eight months fending for himself on the streets at just two-years-old.

People from all over the world donated more than $1million (£801,100) to help the child after Anja Ringgren Loven, a Danish rescue worker, found him to the streets.

Hope was rushed to hospital to receive medication to remove the worms from his stomach and have daily blood transfusions.

Today, one year on, the now-healthy three-year-old will start school.

He was discovered on the streets a year ago (Picture: Anja Ringgren Loven)

He is said to be a little character (Picture: Anja Ringgren Loven)

Heartwarming pictures shared by Anja, the founder of African Children's Aid Education and Development Foundation , show the happy boy dressed in his red school uniform ahead of his big start.

In a Facebook post, she wrote: 'On the 30th of January 2016 I went on a rescue mission with David Emmanuel Umem, Nsidibe Orok and our Nigerian team.

'A rescue mission that went viral, and today it's exactly one year ago the world came to know a young little boy called Hope

'This week Hope will start school.'
Hope was discovered walking along the streets by Anja in January 2015.

He had been abandoned by his family near Uyo, southern Nigeria.

The child was left for dead by his parents (Picture: Anja Ringgren Loven)

His family thought he was a witch (Picture: Anja Ringgren Loven)

Anja rushed the boy to hospital where he quickly gained weight.

He later had surgery for hypospadias – a genital birth defect where the urethra emerges somewhere on the shaft or at the base of the penis, rather than at the tip.

A series of heartbreaking photos posted on Facebook showed the emaciated boy being looked after by humanitarian workers.

He is now well and regularly features on Anja's Facebook page.

Anja moved to Africa three years before she discovered Hope wandering around the streets.

He made an incredible recovery (Picture: Anja Ringgren Loven)

He even loves to read (Picture: Anja Ringgren Loven)

Along with her husband, David Emmanuel Umem, she runs a children's centre where kids can receive medical care, food and an education.

The couple also started building their own orphanage at the end of January.

After rescuing Hope, she wrote on the organisation's website: 'I have seen much here in Nigeria over the last three years. I've spared you many experiences when we've been on rescue missions.

'Thousands of children are being accused of being witches, and we've seen the torture of children, frightened children and dead children.

'The images here show why I am fighting, why I sold everything I own.'