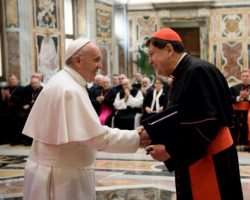 Posters accusing Pope Francis of attacking conservative Catholics appeared around Rome this weekend and were swiftly covered up by city authorities.

The posters, put up during the night between Friday and Saturday by mystery activists, featured a picture of a stern-faced pope and the slogan: “Where’s your mercy?”

The text accused Francis of several interventions targeting conservatives, including what the posters called “the beheading of the Knights of Malta.”

This was a reference to an ancient Catholic order of knights which is now a worldwide charity and whose former Grand Master handed in his resignation to the pope last week after a two-month, highly public feud.

The posters appeared several hours before the Vatican announced the name of the pope’s personal delegate to the troubled order, a move that side-lined conservative Cardinal Raymond Leo Burke, who had been its chaplain since 2014 and is a frequent critic of the pope.

In a letter released by the Vatican on Saturday, Francis told Archbishop Angelo Becciu that he would be the “exclusive spokesman” for the pope at the Order until elections are held for a new Grand Master in several months..

The posters were even more mysterious because sections of the text were written in the working class dialect Romanesco, spoken only in the Rome area.

City authorities pasted white paper over them with the message “illegal advertising”, as they had been put up without authorization or the payment of a tax.

The Vatican had no comment. But Father Antonio Spadaro, a Jesuit who is close to the pope, said in a tweet that they were a sign that Francis was doing a good job and therefore irritating many people.