Boko Haram: As Security Agencies Close In On Borno Administration 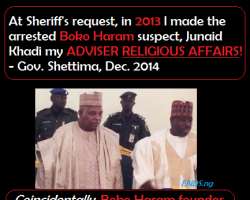 In May of 2014 the Administrator of Borno state, Kashim Shettima said as reported in Today.ng , “Leadership calls for restraint, if I should speak, heads will roll.” It was the second time he had made that remark that year. The governor alluded to knowing the sponsors of Boko Haram but prided himself in restraint that protected these politicians and otherwise highly placed persons. During president Muhammadu Buhari's trip to the United States in 2015, we lamented the president carrying along such a governor who has serially admitted to aiding and abetting Boko Haram and pushed for his arrest and interrogation instead.

Governor Shettima, the then commissioner of finance under the corrupt Ali Modu Sheriff, SAS government, admitted to his rol e along with SAS in facilitating the birth of Boko Haram while they were enmeshed in enriching themselves with the wealth of Borno people. The EFCC has gone after Modu for misappropriating N300 billion ($2 billion). SAS' Finance commissioner Shettima was clearly at the center of this. SAS has repeatedly dared Kashim Shettima to " spill the beans " on Boko Haram. Assuredly they will go down together.

The Borno governor has surrounded himself with Boko Haram-linked persons many of whom have been arrested over the years. In 2012, Kabiru Sokoto , the Boko Haram mastermind charged with the Madalla St. Theresa Church bombing that claimed 40 lives, was arrested in the Borno Governor’s lodge in Abuja and suspiciously released by Deputy CP, Zakari Biu who also hailed from Borno . Again in 2014, governor Shettima fought off the scandal of another terror-linked associate by claiming it was SAS that told him to employ his religious affairs adviser, Junaid Khadi when he was arrested for Boko Haram links.. Since then several arrests of politicians and advisers linked to the Borno administrator have been made with the newest being the alleged arrest of three of his aides for which the Nigerian security agencies are still acting quite suspect by concealing his identity, surprisingly mentioning the event under concealing caption, "an APC governor."

There are many more details linking the state governor with anti-SAS bombings, other political bombings and the targeting of foreign aid workers and the Nigerian military that may be too sensitive for the public but we are aware are in the dossiers of Nigerian intelligence agencies. Additionally, the Borno administration has been accused of missapropriating billions in security vote funds as well as blocking civilian efforts to defend themselves.

Apparently realizing the security agencies likely had him under their scopes, governor Shettima made an unusual speech advising the agents to arrest anyone even if his three sons . It was revealing.

As we have advised in the past, the Buhari administration if desirous of responding appropriately to the seriousness of the Boko Haram crisis, will have suspended the political administration of Borno state long ago and replaced this with a military detachment. The Borno administration continues to kill citizens indirectly via massive looting of food for starving Boko Haram survivors. The state emergency board, SEMA has been serially implicated in diversion of tons of food from storages and entire trailers. This administrative terror is killing and wiping out the surviving population faster than Boko Haram did. The United Nations reports staggering numbers of deaths and projected deaths due to starvation, most especially affecting Borno's children.

Once again we make a passionate and desperate call to the Buhari administration to recognize the seriousness of the atrocities of the Borno administration through the years before and during the Boko Haram terror saga and the continued terror of the people being starved to death. Let our northerners not have died in vain. Avenge the deaths of the Kanuri peoples, the abduction of the Chibok girls and the stain to the name of the religion of Islam and reputation of the north.