Venus and Serena Williams: A bold and audacious promise coming from a father. ~ 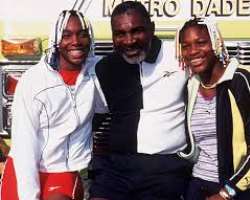 ''The world may know only Venus and Serena Williams as the duo superstars of tennis. But the secret to all that success is founded on a strong family culture. And at the hem of it all is their father and coach, Richard Williams, who is ably supported by his wife, Oracene.'

Unless they are the best of actors putting on the best of acts, the Williams family is a strongly bonded unit who view themselves as a corporation working for the whole instead of selfishly for the individual. With the Chief Executive being Richard Williams, the father of Venus and Serena who have both come to dominate the world of tennis. They are both ranked in the top 10 in the world, and the youngest daughters, Venus and Serena, is the number one family in tennis, according to Tennis Magazine.

During their meteoric rise, Venus and Serena have quieted detractors who severely criticized their father's style and language against racism and the importance of education before tennis. Richard eschewed the established traditional system in the raising of his two extraordinary players. With the help of his wife, Oracene, they devised their own method of molding future champions {practice, practice, practice}, while totally ignoring the junior ranks that the tennis establishment advocates. They also simultaneously focused on their daughters' education. Today, both Venus and Serena are bright and articulate and each possess a vocabulary that can send journalists searching for their dictionaries.

But all these started some years ago when an unknown father stood on a crumbling tennis court in Compton, Califonia, USA, and told his little daughter, Venus that she was going to be the one of the base tennis players in the world. It was indeed a bold and audacious promise coming from a father, then a neighborhood tennis coach, who knew that the odds of this happening was very high. But as it turned out, the father knew best.

It wasn’t easy though. He recalls a time when Venus completed in a tennis tournament, she wasn’t a household name and all the other players knew that she was black and poor. ''I overheard some people say we shouldn’t even be there'' he says. ''They are from Compton'', they said. ''What are they doing here – they can't play.'' They should be glad that I am a good man because if I wasn't a good man, I would have picked up a stick, and knock the hell out of somebody. Looking back on the times when he fought for his daughters to be treated fairly, Williams says, 'So many people just want to jump on a poor guy out of Compton. I came out on a poor guy out of Compton. I came out of the worst ghetto in the world and was simply trying to prove to the world that it doesn’t matter where you came from to be good in tennis. You don’t have to be brought up in the country club to do this. You can actually come out of the ghetto and play tennis.' It seems however that all these criticisms have only served in bettering the performance of Williams. Again, Richard Williams recalls, ''Over a period of time, we gained much confidence in what we were trying to do. A person can pick on you so long, enough that, instead of making you weak, it makes you strong. We decided long ago we didn’t care what people thought. The only thing that would matter in the end was that we thought. And it worked out beautifully.

As with any father, Williams say his memories of training his daughter – like the first time he took Venus onto a tennis court – have also kept him focused and motivated.

''The first time I knew Venus was going to be a good tennis player was the first time I took her out on her day. 'Then I was a tennis coach for neighborhood kids in Compton. I was working with some other kids, and had a shopping cart that would hold 550 balls. It took 3 kids who were teenagers a long time to hit those balls. They wanted to take breaks. Well, while they were taking a break, Venus wanted to hit every ball in that basket. She wouldn’t stop. Every time you tried to stop her, she would start crying. She was only 4 years old. A lot of them she missed. But she would swing at every ball. When she got to the last ball in the basket, she told me to say, 'last one' and I said, 'Okay, last one.' And to this day, I say the same thing to her when she's practicing.'

Williams says life for the family was simple then. At a time, he even focused on not letting Venus and Serena get sucked into the politics surrounding the game of professional tennis. He says he looks forward to the day when both his daughters retire from tennis and move further away from the media spotlight. ''I'll be glad when it's all over. But it's a very difficult decision for them to make when people are offering them all of this money. But money's not everything.''

Today, to the greatest surprise of the tennis establishment and the delight of tennis fans, Venus and Serena have successfully climbed up to the top of professional tennis. The journey was started off when Serena won the U.S. open, when she beat then number one seeded Martina Hingis in straight sets in 2001, when the duo played in the finals of the U.S. open with Venus beating Serena. Venus would later reveal, ''I guess I always imagined Serena and I were good kids (is that) we're obedient and never go crazy is because of our beliefs. In the Bible, it tells us that disobedient children don't live all their days. I believe that."

Despite the inevitably rivalry, the Williams sisters remain close friends. Raised as devout Jehovah's Witnesses, both have received their high school diplomas. Apart from tennis, the two sisters are also celebrities making money from other things like modelling. Serena makes million of dollars in her modeling career, while Venus, whom she (Serena) joined at the Art Institute of Florida, where they studied fashion design in 1999, is now the CEO of her own interior design firm, 'V Starr Interiors.' Serena also have her own company called 'Miami Dolphins Ventures.'

Now, Serena and Venus are known for great feats in the international tennis circle that are often much more than ever achieved by any other African-American athlete, tennis player or female. For instance, Venus, as at 2011, holds the record serve in a main-draw match at 129 mph, towing just behind 40-year old Brenda Schultz McCarthy, who was then the current holder for the fastest women server in history at 130 mph. She (Venus) as at 2011 held the record as the first unseeded woman ever to reach the US Open final, and the first African-American woman to do so since Althea Gibson won back-to-back championships in 1957 and 1958.

Of the two, Serena is the most successful as far as tennis victories and prize monies go today. As at 2011, she was ranked 6th on the All-time Grand Slam Singles Titles among women. She deposed Billie Jean King who held the position with a record 12 Grand Slam singles title around the middle of 2010 when she won the British Open (Wimbledon) raising her titles haul to 13 Grand Slam Singles. Venus has an equally impressive number of Grand Slam singles under her belt, totalling seven as at 2011.

Serena has won three (3) Olympic gold medals in women's doubles and one (1) in singles. And for an impressive achievement, she has won more career prize money than any other female athlete in history, including all-time great, Steffi Graf. As at the year 2011, Serena was then the reigning champion in both singles and doubles at the Australian Open, in singles at Wimbledon, and in women's doubles at the French Open.

She has whopping total of 28 Grand Slam titles, which places her in a very good position on the All-time Grand Slammers' list. 23 in singles titles, 14 in women's doubles titles, and 2 mixed doubles titles. She also is the most recent player, male or female, to have held all four Grand Slam singles titles simultaneously and only the fifth woman in history to do so. Serena ranks fourth in Grand Slam women's singles titles won during the open era, behind Steffi Graff (22 titles) and Chris Evert and Martina Navratilova (18 titles each). She has won more Grand Slam titles in singles, women's doubles, and mixed doubles than any other active female player. All of these emanated from a determined father's coaching and the children's desire to succeed.

The sisters are so good at what they do. They proved that at the just concluded Australian Open 2017. And so, they get to play themselves for international glory and of course, prize money. The sisters have played each other in so many professionally matches since 1998, with Serena winning most of these matches. They met in eight Grand Slam finals, with Serena wining six (6) times. Starting from the 2002 French Open, the Williams sisters played each other in other consecutive Grand Slam singles finals, which was the first time in the open era that the same two players had contested four consecutive Grand Slam finals. Together, they have won 12 Grand Slam double titles.

Indeed, choosing to do things a little differently paid off for the fine girls. Today, they are not only multimillionaires, but legends, all because of their father's desire for something better for his girls.

What are you doing now? Do you have passion for it? Do you get support from your parents? My advice to you keep doing, doing, doing and develop passion in it. There is always a light at the end of the tunnel.