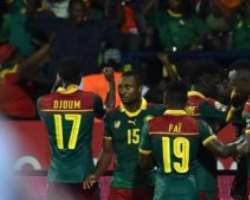 For years, Ghana’s Black Stars have been Africa’s nearly men.

Since 2008, they have reached the Africa Cup of Nations semifinals on six consecutive occasions yet failed to lift the continent’s most prestigious prize.

It’s a barren run stretching back 35 years and Thursday’s match against an inexperienced Cameroon side provided an opportunity to reach the final and exorcise their demons.

Despite the exploits of both teams on the pitch during the tournament, much of the talk surrounding the second semifinal concerned issues off it.

The Ghanaian Football Association was forced to issue a statement after rumors emerged that head coach Avram Grant had passed away, while there were calls for goalkeeper Razak Brimah to be suspended for indiscipline.

There were also ongoing doubts about talisman Asamoah Gyan’s fitness, with Ghana’s record goalscorer once again not fit enough to start Thursday.

Cameroon, on the other hand, has been forced to contend with several high-profile players refusing call-ups to the squad, before a dispute over bonus payments threatened to derail its preparation.

European stars Joel Matip, Eric Choupo-Moting and Allan Nyom were among the seven key players who opted out of coach Hugo Broos’ group.

Not that you would have noticed, with this young team worthy of its place in the semifinals.

And how those players must now be ruefully sitting at home, wishing they had traveled to Gabon.

But nerves on such an occasion are to be expected and Ghana started the match in command, as Christian Atsu provided an early threat down the right.

However, it lasted just five minutes as Cameroon wrested back control and didn’t relent.

Christian Bassogog, one of several standout players for this threadbare Cameroon side at AFCON 2017, gave Ghana right back Harrison Afful an early headache and won the first in a succession of corners.

Nobody in a Ghana shirt tracked Adolphe Teikeu’s run from outside the box and his free header at the near post was smartly pushed around the post by Brimah.

And Brimah made it a hat-trick of saves not long after, this time denying Tambe at the near post.

Despite Brimah’s good form, both tonight in Franceville and over the course of the tournament, there had been calls by large sections of supporters for the 29-year-old to be dropped.

The team — and Brimah in particular — had drawn criticism for the quarterfinal performance against DR Congo, something which the goalkeeper took exception to.

He responded by posting an expletive-laden video on Facebook directed at those who had questioned the team, and some fans subsequently demanded the stopper should be left out of the team.

It took until the half hour mark for Ghana to muster a chance of any real note, but Jordan Ayew snatched at his shot inside the box to send the ball high and wide.

For all their huffing and puffing, Cameroon’s Indomitable Lions almost found themselves behind at the break.

Atsu’s inch-perfect through ball five minutes before half time found Jordan Ayew, but the new Swansea signing dragged his shot inches wide of the far post.

With that effort, the half time whistle blew and Grant had a chance to rally his troops. The team talk had its desired effect and the Black Stars emerged rejuvenated.

Atsu, Ghana’s liveliest player throughout, again troubled Cameroon’s right back Collins Fai and flashed an inviting cross into the six-yard box, although a lack of white shirts saw the chance go begging.

Ghana continued to grow in confidence and Cameroon’s players were forced to cynically foul Atsu to halt another lung-busting run.

However, just as it started to look like a Ghanaian goal was imminent, Cameroon took the lead against the run of play.

Brimah — previously maligned for his efforts at dealing with crosses into the box — will have only fueled the fire of his critics.

It was his unconvincing flap at Moukandjo’s cross which gifted Michael Ngadeu-Ngadjui the ball at the far post, allowing the defender to brilliantly fire the ball into the roof of the net from a tight angle.

With that, Grant was forced to play his trump card as the former Chelsea manager immediately introduced star man Gyan.

As the clocked agonizingly ticked down, Ghana’s players piled forward, desperately hoping to find an equalizer.

However, a poor delivery into the box resulted in a swift Cameroon counter-attack, which Bassogog rounded off with a deft chip past the onrushing Brimah to seal the win and send the the Cameroon bench into raptures.

Not since 2002, when a Samuel Eto’o-inspired Cameroon won a second successive AFCON title, have the Indomitable Lions ruled the continent.

“The players who didn’t come have their own personal reasons why they didn’t come and we are not looking back,” defender Collins said before the match.

This young, inexperienced crop of players will now be looking forward to writing some history of their own.