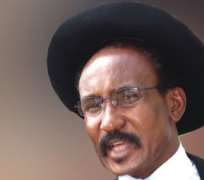 SAN FRANCISCO, February 02, (THEWILL) – A former military governor of Kaduna State, Col. Abubakar Dangiwa Umar (rtd) has advised the National Judicial Council, NJC, not to submit any other name to President Muhammadu Buhari should he fail to transmit the name of Justice Justice Walter Onnoghen to the Senate for confirmation as the Substantive Chief Justice of Nigeria, CJN.

It would be recalled that following the retirement of Justice Mahmoud Mohammed as the nation's chief judge, President Buhari appointed Onnoghen – the most senior justice of supreme court – as Acting CJN last November

Since then, the presidency is yet to forward Onnoghen's name, whose three-month acting term will elapse on February 10, to the Senate for confirmation as the Substantive CJN.

In a statement issued on Thursday, the influential Umar also urged the Senate not to confirm any nominee forwarded to it by Buhari for the position of Chief Justice of Nigeria, CJN, apart from the name of Onnoghen.

He stated that the failure of the presidency to forward Onnoghen's name to the Senate for confirmation without any reason “leaves Nigerians guessing and speculating”.

The statement reads, “In a few days, the tenure of acting appointment of justice Onnoghen will expire. Going by our extant constitution, the acting CJN will be disqualified from appointment as the substantive CJN unless the NJC resubmit his nomination to the president.

“Already, many analysts view this action as a ploy to deny a southerner his right to succession based on his seniority in keeping with the appointment protocol observed the NJC in making the appointment.

“In the event of this occurrence, the NJC must not forward any other name nor should the senate confirm any other nominee.

“This will serve to check the excesses of this administration and reinforce the unity of the nation which has already been pushed to the precipice by the recruitment and appointment policies of a government which tends to favour the north in violation of the federal character provision of the constitution.”

The Cross River State National Assembly Caucus had on Tuesday requested Buhari to urgently transmit the name of Onnoghen to the Senate for confirmation as the substantive CJN, stating that this has become imperative because succession to the exalted position had been based on merit and seniority.