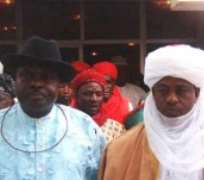 THE Sultan of Sokoto, Alhaji Muhammad Saad Abubakar, yesterday, advised the Governor of Central Bank of Nigeria (CBN), Mallam Sanusi Lamido Sanusi, to put into consideration the overall interest of the nation's economy and security implications of his ongoing reforms in the banking sector.

The Sultan's comment is coming barely one month after the National Security Adviser (NSA), Gen. Aliyu Gusau (Rtd), faulted the banking reforms, pointing out that only few banks were being penalised for offences committed by all.

The NSA, who spoke at a retreat for ministers recently in Abuja, said: “The on-going CBN intervention seemed to have damaged economic activities in the banking sector to the detriment of the larger society.”

Welcoming the Director-General of Securities and Exchange Commission (SEC), Ms Arunma Oteh to his palace in Sokoto, yesterday, the Sultan said reforms in the banking sector can be carried out without 'blowing it out of proportion'.

Emphasising that the ongoing reforms have security implications for the country, the Sultan said: 'When we (Nigeria) have problems, we should not blow it out of proportion', adding that 'we can reposition the banks without blowing it out of propotion'.

While commending the CBN governor for the steps taken so far to reform the banking sector, the Sultan said the visit of the SEC DG was not the appropriate avenue to discuss CBN policies, pointing out that 'we will give him some tips on the right track'.

He also used the opportunity to criticise the performance of some banks, which he accused of embarking on round tripping, foreign exchange transactions without adding value to the economy.

He said instead of just declaring 'billions on paper', banks in Nigeria should emulate their counterpart in other parts of the world by contributing meaningfully to the development of the economy.

The Sultan described Nigeria as the best country in the world, adding that Nigerians are doing very well in different fields across the world.

For example, according to the Sultan, the DG of SEC was making positive impact abroad before she was invited by the Federal Government to come home to contribute her quota to the development of the Nigerian economy.

He also appealed to the staff of the commission to give the DG all the support she needs to succeed.

Making reference to earlier call by the DG for students in secondary schools to develop the culture of saving and investing in the capital market, the Sultan said the government should make the economy work very well for people to have enough to save.

He added that people can only consider saving and investing in the capital market after they have taken care of their immediate needs.

Earlier in her submission, the SEC DG said the management of the commission was in the state to launch capital market clubs in secondary schools.

She said for a start, the programme would cover 31 secondary schools across all the local government areas in the state.