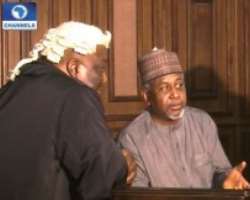 For the second time, the Nigerian government has applied to the Federal High Court in Abuja for secret trial and protection of witnesses that will testify against the former National Security Adviser, Colonel Sambo Dasuki in the case of unlawful possession of fire-arms and money laundering brought against him.

The fresh application which was filed by the prosecutor, Mr Oladipo Okpeseyi, urged the court to try the former National Security Adviser in secret and also protect the witnesses by not allowing their names and addresses to be made public in the course of the trial.

But in a strong opposition to the fresh request, the former National Security Adviser asked the court to dismiss the government motion on the ground that it lacks merit and constituted a gross abuse of court process.

Counsel to the former NSA, Mr Ahmed Raji, argued that there was no justification for the federal government to have brought the motion for secret trial for the second time having lost in the first motion filed before the same court.

He reminded the court that government had on its own volition placed the charges against him on the internet where the names, addresses and positions of the witnesses were conspicuously put at the disposal of the general public.

He reminded the court that in a ruling it dismissed the request on the ground that the witnesses were already known by the public having given their names and addresses to the public through the internet.

He further said that bringing the same motion to the same court constituted a gross abuse of court process and that what the prosecution ought to do if not satisfied with the decision of the court is to approach the Court of Appeal to ventilate its case.

The defence did not object to the request for the adjournment but clarified that the fresh motion for secret trial was served on the defendant last Thursday, hence their counter affidavit prepared over the weekend was served on Monday within the time allowed by law.

The federal government through the Department of State Services (DSS) had in 2015 slammed a 2-count charge of unlawful possession of fire-arms and money laundering against Colonel Dasuki. - Channels.