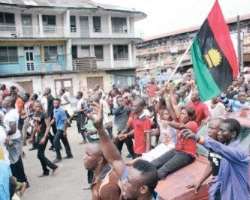 His campaigns were characterised by an unprecedented degree of xenophobic, hysteric and divisive rhetoric. Donald Trump's triumph over a far more personable, restrained and experienced Hillary Clinton in the US presidential election was borne on the wings of an unabashed demagoguery that fed opportunistically on the fears, insecurities and prejudices of a highly polarised, multi-cultural society.

Given the overwhelming influence of the United States on global affairs as the world's only superpower, it was inevitable that Trump's formal assumption of office on January 20, would elicit diametrically opposed but equally passionate, reflexive and emotive reactions both within America and across the globe.

While a large number of Nigerians no doubt identify with the millions all over the world that have expressed outrage, disgust and alarm over the values Trump symbolises, there are also sections of the populace that are elated by what they perceive as the bright prospects of a Trump presidency. It is not surprising that the Igbo separatist group, Indigenous People of Biafra (IPOB), for instance, has been uninhibited in its elation at the ascendancy of the Trump phenomenon in the US. IPOB reasons, rightly or wrongly, that its advocacy for an autonomous republic of Biafra will receive a tremendous boost from the emerging dominant anti-globalist and nationalist sentiments in the west that has Trump as one of its key exemplars.

This was certainly what motivated the solidarity rally organised by IPOB in Port Harcourt, the Rivers State capital, to demonstrate its affection for Trump on the occasion of his inauguration. It is unfortunate that what was supposed to be the constitutionally guaranteed exercise of freedom of association and assembly, turned into a violent clash with agents of the Nigerian state. IPOB claims that no less than 20 persons were killed and many others sustained injuries when security agents confronted its members as they sought to march towards Mile One area of Port Harcourt through Aba Road - a major traffic artery in the city.

Of course, the police, not unexpectedly, denied this claim saying no lives were lost but admitting that 63 persons were arrested for participating in the rally. It is difficult to comprehend why the police would consider a civil demonstration by a group of unarmed civilians as unlawful. Contrary to what appears to be the mindset of the security agencies, individual and group rights to agitate openly and publicly for a cause peacefully are guaranteed under our constitution.

The problem is that when government and its security agents stigmatise, negatively label and actively repress individuals and groups for activities that are not unlawful, a psychological climate is created in which peaceful assemblies will inevitably degenerate to armed confrontations. We have seen this scenario at play, for instance, in the case of the Shiite Islamic Movement of Nigeria (IMN) in Kaduna State and some other parts of the North such that this has become a serious and steadily escalating security challenge.

While IPOB's claim that 20 of its members were killed during the pro-Trump demonstrations could possibly be an exaggeration, it is difficult to give the police the benefit of the doubt given the excessive and unwarranted force with which civil demonstrations had been repressed in the past. This incident should be thoroughly investigated to uncover the truth. More importantly, government should urgently rethink its strategic response to IPOB and other agitators for Biafra. Its current approach, widely perceived as high-handed, overbearing and insensitive is generating a groundswell of sympathy for the idea of secession among many Igbos who would ordinarily have been indifferent to what would have ordinarily been a fleeting irritation.