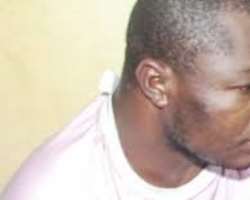 The raid followed alleged credible information that another dreaded kidnapper in the prisons was running his gang from his place of confinement. This was even as the Comptroller General of Prisons, Ahmed Ja'afaru arrived Owerri weekend with a high-powered team of investigators to probe Vampire's escape.

According to sources, the suspect who was simply identified as Uju, had been running his criminal gang from the prisons through the telephone lines.

Policemen had intercepted a telephone discussion between Uju and his gang members, as he was directing them to stop kidnapping business along the Owerri- Port Harcourt expressway and move to Avu - Umuokanni Road, following incessant disturbance by policemen along the former.

Apart from the Pump Action gun, Uju was also further said to have used the proceeds from kidnapping to purchase two oil mills which had been extracting palm oil for the villagers and yielding proceeds for him.

The information was said to have filtered to the Imo State Police Commissioner, Taiwo Lakanu, who ordered his men to raid the prisons and search all the inmates, leading to the recovery of the 264 telephone sets alleged to have been illegally smuggled into the prisons.

Lakanu's attention was said to have been drawn to the issue by security men who informed him that they were under pressure by two powerful men including a serving judge and a bishop to effect Uju's release from the prisons.

Meantime, the Nigeria Prisons Service has lamented the geometric increase in inmate population, specifically lamenting the situation of Owerri Prisons which was built 112 years ago to accommodate 540 inmates but now  having an inmate population of 2, 260.

Comptroller General of Prisons, Ahmed Ja'afaru stated this on Monday  in Owerri when  he  visited the Federal Medical Centre in the area to commiserate with the victims of the recent attack on prisoners by yet-to-be identified gunmen within the premises of Owerri High Court .

In a statement signed by the Service spokesperson, Francis Enobore, the CG recalled that, 'Owerri prison was built in 1905 with an intake capacity of 540 inmates but as at the time of the incident, the prison had a population of 2,260 prisoners. Out of this number 2,044 are awaiting trial.'

Promising to improve welfare package for prisoners especially medical attention to those in need,  Mr Ja'afaru also visited four other inmates who sustained various degrees of bullet wounds and who are now receiving treatment in Owerri Prisons Clinic.

It would be recalled that last Friday, 58 pre-trial detainees who were taken to Owerri High Court in two Black Maria Court Duty Vehicles were attacked as the inmates disembarked from the vehicles within the premises of the court. The gunmen who were said to have strategically positioned themselves in the premises opened fire and shot sporadically hitting five inmates in the process.

The escort wardens in collaboration with other sister security agencies were able to secure 49 of the inmates and returned them to safe custody.

Unfortunately, the service said, 'a notorious criminal, Chibueze Henry Onyekachi, also known as Vampire, on whose behalf the hoodlums were suspected to have carried out the dastardly act, and seven other prisoners escaped.

'The CGP wishes to appreciate other security agencies for their prompt response and assure members of the public that the fleeing fugitives would be rearrested in no distant time.'

He also appealed to the   public to provide useful information that would lead to their arrest particularly the notorious criminal, Chibueze Henry Onyekachi, aka Vampire, while thanking the Governor of Imo State for taking the lead in this direction through promising financial reward for information that would aid his arrest', the statement added. - Vanguard.