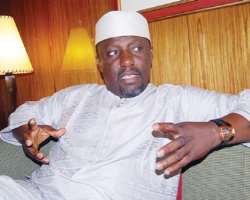 Governor Rochas Okorocha of Imo State has jettisoned the call by former President Olusegun Obasanjo that the South East should contest for President in 2019, saying that it was only ripe for Ndigbo to do so after President Muhammadu Buhari has had his full eight years tenure.

Okorocha said that there were frantic efforts to unite the party in the south east.

He also maintained his earlier position that some governors from the region had indicated interest to join the APC.

On the denial by south east governors that they have not joined APC and that he, Okorocha does not inspire any leadership, the governor said it was possible the governors were not ready yet.

'We are hopeful from all discussions that about two governors will be joining us in the South East to strengthen the party. Right now, we have agreed that Sen. Ken Nnamani should take a lead of the party in the South East to enable us have a common understanding, long with other leaders like Chief Jim Nwobodo.'

'I don't think it is true, but if it is true it is probably because it is not time. It could be because I spoke when they were not yet ready.

'Leadership is not in question, we have agreed the Ken Nnamdi should lead. So, it is not about Rochas Okorocha, I am a governor', he said.