How 'spineless' Obama has 'broken my heart': Blagojevich daughter 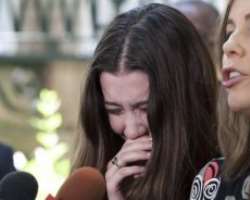 In a blistering Facebook post, Amy Blagojevich, the oldest daughter of former governor and current federal inmate Rod Blagojevich, blasted former President Barack Obama for not using his presidential powers to release her father from prison.

The 20-year-old Northwestern University student's screed was posted Thursday night on the Facebook page of former Illinois first lady Patti Blagojevich, who wrote that she was “happy” to post her daughter's letter “if it brings her any relief or comfort.”

“You've broken my heart once again, and you've betrayed the concept of justice like many other heartless individuals before you,” Amy Blagojevich wrote, later explaining she hadn't expected Obama to use his power to pardon or commute her father's sentence in his first term, or even in his second term.

“Turns out you are just like the rest — selfish and spineless.”

The 1,511 word open letter posted Thursday comes after other emotional pleas Blagojevich's daughters made to the president along with their father's formal request, letters that Amy Blagojevich said an unnamed “someone” had promised to give to Obama himself.

“You can't deny that you saw the letters my sister and I wrote. I am almost certain that someone put them directly in your hands,” she wrote on Thursday. “That's what they told us they would do, at least.

“So you read them. You knew of our heartache and desperation.”

Rod Blagojevich, who was convicted in 2012 on corruption charges related, in part, to an attempt to sell an appointment to the U.S. Senate seat Obama vacated when Obama was elected president in 2008, is four years into a 14-year sentence. The former governor, 60, is scheduled for release in 2024, according to the federal Bureau of Prisons.

Amy Blagojevich said she had become a supporter of Obama, and concedes the political realities that would have kept the president from pardoning her father sooner than the final days of his administration.

“I accepted that you never would've done anything during your first term because it would ruin your chances of being reelected,” she said. “And by the second term you had to campaign for Hillary.”

But with the election over, Amy wrote that she was unable to understand Obama's inaction.

“You didn't have to pardon him, only commute the sentence. You just had to let him come home,” she wrote. “You didn't. You released others, like Chelsea Manning and FALN terrorists, who actually committed reprehensible crimes, but you failed to release an innocent man.”

A representative for Obama did not respond to a request for comment Thursday evening. Neither did Amy Blagojevich nor her mother.

Both Blagojevich daughters wrote letters to Obama on behalf of their father in November, asking the president to “let him come home to take care of his family.”

“I talk to my dad almost every night, but it is so hard to stay connected to him,” 13-year-old Annie wrote. “I know you have two daughters that are close to our ages. My dad is a good father, and he loves us so much. I know you can imagine how it would be to be separated from them for so long.”

In her November letter, Amy wrote that, even in the more than 4½ years her father has been in prison, “I haven't gotten used to this 'new normal.' ”

“I hope you can see that he's suffered far beyond what most in his situation have and my family, thus, has too,” she wrote.

More than 16,000 people petitioned Obama for leniency, according to the Department of Justice, and the president granted 1,715 commutations.

The president granted the release of Oscar Lopez Rivera, 74, who was sentenced to 55 years in prison for his role in the struggle for independence for the U.S. island territory. He was part of the ultranationalist Armed Forces of National Liberation of FALN that has claimed responsibility for more than 100 bombings at public and commercial buildings in U.S. cities, including Chicago, New York and Washington, during the 1970s and '80s.

Obama also commuted the prison sentence of Chelsea Manning, allowing the convicted Army leaker to go free nearly three decades early. Manning was initially sentenced to 35 years in prison after she was found guilty of handing over classified government and military documents to Julian Assange's anti-secrecy website WikiLeaks. She will be released in May.

Eric “Fat Eric” Wilson, a former “governor” in Gangster Disciples kingpin Larry Hoover's drug empire, won a commutation. Obama reduced Wilson's life sentence to 35 years in prison. Wilson, 47, is currently held in the federal prison in downstate Pekin and is expected to be released in about seven years.

In the same round of clemency actions earlier this month, Obama reduced the prison terms of 330 inmates convicted of federal drug crimes. In eight years in the White House, Obama released 568 inmates serving life sentences.